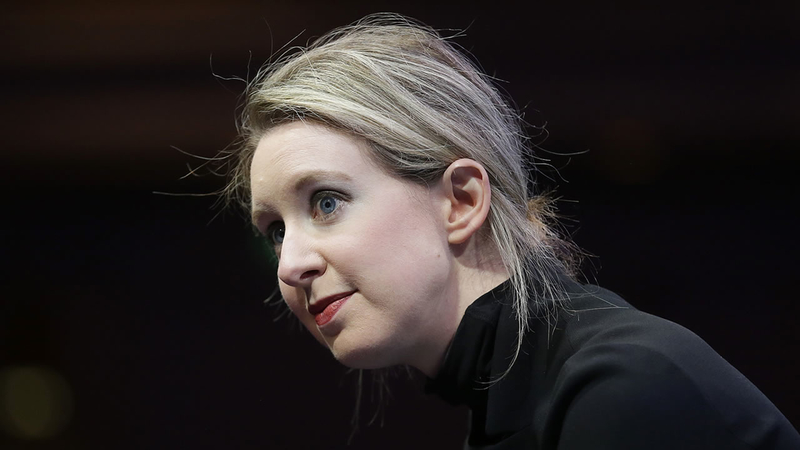 RELATED: What we could expect in trial of Theranos founder Elizabeth Holmes

Holmes is charged with 12 counts of fraud and wire fraud in connection with her Silicon Valley company, which developed a promising blood analysis device that required only a finger-prick-sized sample instead of one or more vials to be drawn.

Get the latest updates from ABC7 News reporter David Louie, who is closely following the trial, below:

Buddhist juror excused over religious beliefs
A juror has been excused from the Elizabeth Holmes trial after expressing concerns about how her Buddhist faith may affect her decision. She told the judge she has been thinking about Holmes' possible punishment every day, despite jurors being told they're only to decide the facts of the case. An alternate has now taken her place.

Former Theranos lab director testifies
Testimony has resumed in Day 9 of the trial of Theranos founder Elizabeth Holmes. On Tuesday, former Theranos lab director Adam Rosendorff testified as a witness. Rosendorff told the court he was pressured to defend the inaccurate blood results from Holmes and Theranos' Chief Operating Officer Ramesh "Sunny" Balwani. He said the false tests were so rampant he would get frequent complaints from doctors. Holmes is facing 12 counts of fraud.

Former US defense secretary testifies in Holmes fraud trial
Former U.S. Secretary of Defense James Mattis testified Wednesday in the trial of fallen tech star Elizabeth Holmes, saying the entrepreneur misled him into believing she was on the verge of rolling out a blood-testing breakthrough that he hoped would help save lives of troops in battle.

Mattis' appearance came during the sixth day of a high-profile trial in San Jose, California. The U.S. government alleges that Holmes duped sophisticated investors, patients and customers into believing that her startup, Theranos, had developed a technology that could scan for an array of potential health problems with just a few drops of blood. Existing tests generally each require a vial of blood.

During more than three hours of maskless testimony delivered behind plexiglass, Mattis recalled how impressed he was with Holmes when he first met her in 2011 while still serving a four-star general in the Marine Corps, where he oversaw U.S. wars in Iraq and Afghanistan.

Former Theranos scientist resumes testimony
Elizabeth Holmes is back in court this morning for day five of her fraud trial. Holmes arrived at the federal court building in San Jose, where a former Theranos scientist resumed testimony about her concerns regarding the company's blood-testing machines. The witness told the jury that she didn't think the devices were ready to be used for patient samples. She also claimed that she made copies of internal communications and documents before resigning because she worried she would be blamed.

Former lab worker continues testimony
Former lab worker Erika Cheung is on the stand today. Earlier, she testified the company's COO responded with anger and irritation after concerns were raised about the high rate of failed results. The defense countered by pointing out Cheung had less education and experience than other member's on her team.

Whistleblower says Theranos bosses manipulated test results, ignored her concerns about high rate of test failures
Erika Cheung took the witness stand for the prosecution for the second day in the Elizabeth Holmes fraud trial in San Jose, claiming that her Theranos bosses ignored her concerns about a high rate of failed quality control test results. Cheung worked as a lab associate in Theranos' research lab and in its clinical lab.

She later quit after a meeting with Sunny Balwani, Theranos' COO. Cheung described Balwani as irritated and angry over coming to him with her complaints. She said he told her that her job was to process patient blood tests.

Cheung also testified that she shared her concerns with a fellow lab associate, Tyler Shultz, who had special access to Elizabeth Holmes because his grandfather, the late George Shultz, was on the Theranos board of directors.

Trial resumes after juror exposed to COVID-19
As the Theranos trial moved into its second day, a former lab associate took the stand and started to build the government's case that the company's blood analyzer during her time there wasn't living up to the promises that founder Elizabeth Holmes was making to investors, the medical community and others.

Erika Cheung worked in research and development but quit after six months over concerns about inaccurate test results. She told jurors in the San Jose trial that there were problems passing daily quality control tests.

Also on Tuesday, controller So Han Spivey detailed how Theranos plowed so much of its cash into research and development that it hurt its balance sheet, even as investors provided more capital.

2nd day of trial canceled due to juror COVID-19 exposure
The second day of the Theranos trial was canceled when a juror notified the court of exposure to someone over the weekend who has been diagnosed with COVID-19. Pending the results of a virus test, hearings will resume next Tuesday.

The Theranos comptroller, the government's first witness, was scheduled to resume testimony Friday. At the end of day one on Wednesday, So Han Spivey began answering questions about the company's financial situation in 2009 and how it managed to raise $25 million from investors in 2010.

Opening arguments begin in Theranos founder trial
The jury of seven men and five women heard opening statements from prosecution and defense attorneys, outlining what evidence and testimony to expect over the next three months or longer.

In the government's opening statement, U.S. Attorney Robert Leach told the jury that Holmes engaged in a scheme of fraud and misleading claims to attract investors and to expand the availability of its testing device into Walgreen's and Safeway stores. Leach claimed the test results were inaccurate, and the jury will hear from patients who were misdiagnosed. A trail of emails will be shared that pointed out those issues with Holmes at the same time she was continuing to attract more money from investors.

Defense attorney Lance Wade then presented his opening statement, saying Holmes "didn't go to work every day intending to lie, cheat and steal." He portrayed the Stanford dropout as totally committed for 15 years to building a successful company and providing jobs for hundreds of people. Her goal, he said, was to make blood testing cheaper and available to more patients, even if they lacked insurance.

The prosecution indicated witnesses may include patients whose blood results were inaccurate, along with investors. The defense urged jurors to be patient as evidence is presented over the next three months.

Holmes sat at the defense table during the morning session. So far there has been no indication whether she will testify in her defense. There has also been no mention of a possible abuse defense that was disclosed in a court filing recently unsealed.

NOTE: Court will be in session only on Tuesdays, Wednesdays and Fridays.