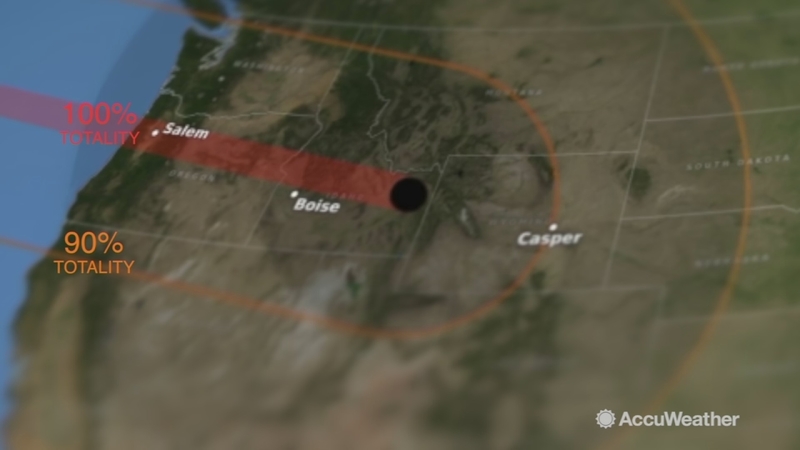 Watch the path of the solar eclipse

If you don't live in a city in the path of the total solar eclipse on Aug. 21, it's time to start making your travel plans.

Here are some of the best places within the eclipse's path of totality to watch the spectacular sky show:

Oregon is the first state in the path of this year's eclipse and the city of Salem is already making plans for the big event. The solar eclipse starts at 9:05 a.m. PDT and totality begins at 10:17 a.m. PDT, lasting for nearly two minutes. In the small town of Madras, officials are holding a three-day viewing party running from Aug. 18 through Aug. 21 with a lineup of music and other entertainment.

According to NASA, the city will have four designated viewing locations -- Old Butte Park, Tautphaus Park, Freeman Park and Community Park. Craters of the Moon national monument in Arco, Idaho will have a three-day festival with no limit on attendees, public parking and free solar glasses.

The centerline of the total eclipse will pass over the southern part of Grand Teton National Park in the Jackson Hole valley, making it one of the best places in the country to experience the astronomical event. The solar eclipse starts at 10:16 a.m. MDT and totality begins just before 11:35 a.m. MDT, lasting for a little over two minutes.

The town of Casper, Wyo. is hosting a festival to celebrate the eclipse that is free to the public. The solar eclipse starts at 10:22 a.m. MDT and totality begins at 11:42 a.m. MDT, lasting for a little under two-and-a-half minutes.

On eclipse day, put on your special glasses and view the big show from the Lincoln Saltdogs baseball stadium, which is hosting an eclipse-themed game. As the eclipse approaches, the baseball game will enter an "eclipse delay" so fans and players can enjoy the rare event. The solar eclipse starts at 11:37 a.m. CDT and totality begins at 1:02 p.m. CDT, lasting for a little under a minute and a half.

Beginning Aug. 19, Jefferson will host a three-day celebration of art, astronomy and entertainment on the Missouri State Capitol lawn and at various other locations around the city. The solar eclipse starts at 11:46 a.m. CDT and totality begins at 1:13 p.m. CDT, lasting for roughly two-and-a-half minutes. One of the best free places to see the eclipse in Missouri is in the city of St. Joseph, which will experience one of the longest moments of total darkness - about 2 minutes and 38 seconds.

Southern Illinois University in Carbondale, Ill., has hit the jackpot. In addition to falling under the path of totality this time, the city and university will fall under it again when the next solar eclipse crosses the U.S. in 2024.

The total eclipse will hit Carbondale this year at 1:21 p.m. local time and last for 2 minutes and 20 seconds.

Nashville's Adventure Science Center will host a three-day festival packed with live music and science demonstrations as well as an eclipse viewing party on Aug. 21. Just two hours outside of the city, The Lands Between the Lakes National Recreation Area is hosting campers for either the weekend or those walking in to view the eclipse.

The total solar eclipse passes over the northeast corner of Georgia covering Rabun County and Tallulah Falls State Park. The town of Blairsville will experience 2 minutes of totality while Clayton is closer to the center of the path of the eclipse and enjoys 2 minutes and 35 seconds. Some county-wide events include bluegrass at Tallulah Falls, a golf tournament at Sky Valley Country Club, a lecture series with astronomers and a 5K run.

One of the best last-minute places to see the total solar eclipse is Columbia, S.C., which boasts the longest viewing of the total eclipse on the East Coast. The city will host the "Total Eclipse Weekend" from Aug. 18 to Aug. 21, featuring more than 80 eclipse-related festivals and events.

Part of Charleston will also be able to see totality. Totality comes to the city at 2:46 p.m., lasting about 1 minutes and 31 seconds.

Wherever you choose to go, former NASA astronaut and senior manager Steven Hawley advises booking any travel tickets and hotel reservations way in advance and to expect plenty of traffic on the road.