KGO
MENLO PARK, Calif. (KGO) -- A fatal train versus car collision on Monday night led to a horrendous commuter backup. And on Tuesday, a pedestrian was hit by another train on the Peninsula. The fatal train accident happened at the Ravenswood crossing in Menlo Park.

Caltrain crews were able to fix the crossing gate around 5 p.m. on Tuesday, just in time for the evening commute. Earlier in the evening, a driver left a red rose near the tracks; a sad reminder of what happened.

A driver left a rose near the site of a fatal crash between a vehicle and Caltrain at the Ravenswood Crossing in Menlo Park, Calif. on Feb. 24, 2015.

"I think the one in Menlo Park is an accident waiting to happen," said Menlo Park resident and Caltrain rider Jill Jessup.

Jessup lives near the Ravenswood crossing. Although Caltrain says the crash on Monday night was the first fatal car collision there, people who use it as a commuter route tell us it's dangerous. Busy El Camino is only one block away, cars back up all the time when the signal turns red, and it's also a pedestrian crossing.

"Right when you get across the tracks, the cars have to stop for a pedestrian," Jessup said. "So even on a green light, you could be caught on these tracks."

Caltrain crews worked non-stop to fix the crossing gate before the evening rush.

A vehicle was struck by Caltrain at the Ravenswood Crossing in Menlo Park, Calif. on Feb. 23, 2015.

On Monday night, thousands of evening commuters were stuck for hours after a train smashed into a car on the tracks around 5 p.m., killing a female driver.

Then another tragedy struck on the tracks just before noon on Tuesday. This one involved a train and a pedestrian just over a mile away at the Palo Alto station. The adult female victim was taken to Stanford Medical Center, still conscious.

An average of 12 pedestrians die on the tracks every year. According to Caltrain, almost all are ruled as suicides. The transit agency says they average about one car vs. train accident a month. Since 1992, six of them have resulted in deaths.

Caltrain says the answer is for cities along the Peninsula to build grade separations at crossings.

"Either elevate them or trench them, whichever way allows vehicle traffic to move unimpeded," said Ackemann. 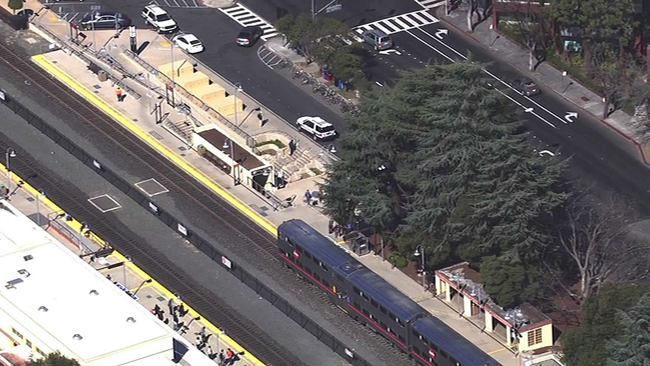 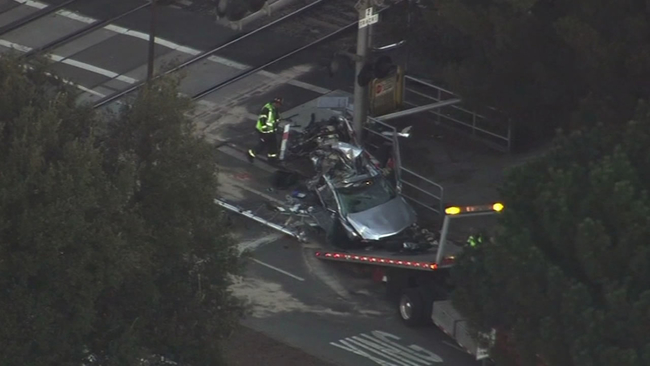