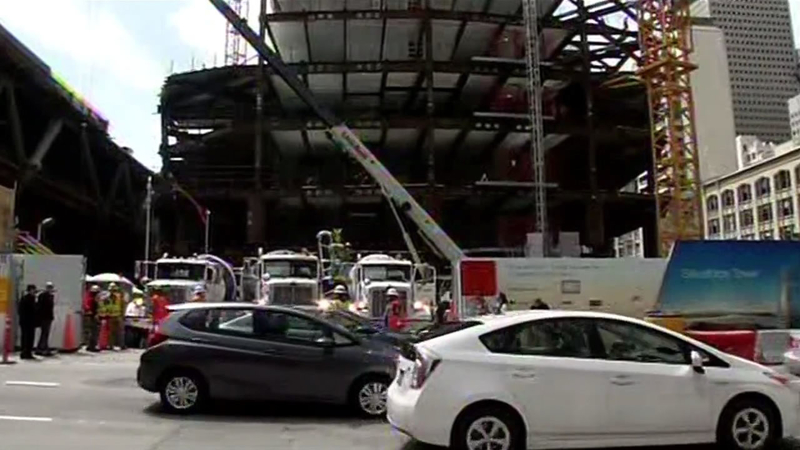 SF's Transbay Terminal running out of funds for construction costs

SAN FRANCISCO (KGO) -- Construction on the Transbay Terminal is underway right now and it's running out of money. City officials are considering a multi-million dollar loan to help close the gap.

The cost of the Transbay Terminal project was supposed to cost roughly $1.6 billion, but that has since ballooned to $2.3 billion and now the city of San Francisco is considering a proposal to bridge that gap.

For months, the future Transbay Bus Terminal has been rising over a large piece of the South of Market District downtown, but it's running over budget and needs to fill a funding gap.

Ed Reiskin is on the board of the Trans Bay joint powers authority. He says the boom in construction across San Francisco is partially to blame for booming costs.
"The gap is about $250 million," said Ed Reiskin.

Supervisor Jane Kim is also on the Joint Powers Authority Board. She presented a plan to the board of supervisors Tuesday that would allow San Francisco to borrow money that would cover the budget gap.

"In fact, construction projects throughout the city are seeing cost overruns because there is so much development and competition for construction companies," Kim said.

That loan should be paid back over five to ten years. It's something some tax payers have mixed opinions on.

"I don't really support that," said one San Francisco resident.

The Salesforce Tower that's under construction and other projects are supposed to be paying for the Transbay Terminal, but those funds are not coming in fast enough. The loan should be paid back as soon as other surrounding projects pick up the tab. And then it's on to phase two of the massive terminal, connecting it to King Street for Caltrain and future high speed rail service.

The money for phase two has not come together just yet.