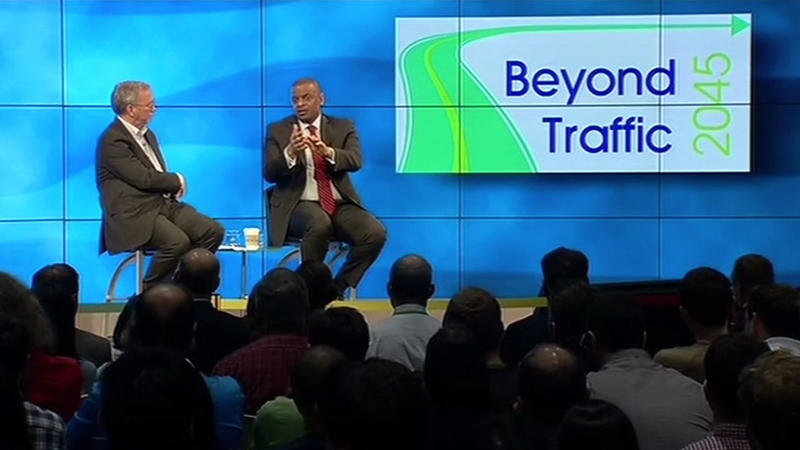 MOUNTAIN VIEW, Calif. (KGO) -- Google is concerned about the future of transportation and on Monday the United States Transportation Secretary Anthony Foxx met with the company to discuss the country's looming transportation problems.

Foxx met with Google employees for a question and session. Employees asked about more public transportation options up and down the Peninsula. Foxx said more options should be available in the Bay Area and across the country and more ways to fund them should also be available.

Foxx got a short tour of the company's campus via driverless car, which he called "phenomenal." Driverless car technology was also included in the afternoon conversation about the nation's transportation issues.

A little blue book from the Department of Transportation laid out the difficult realities of traffic and funding of infrastructure.

They are all issues the Bay Area is dealing with. Google Executive Chairman Eric Schmidt mentioned the company's private bus system.

"I believe we operate the largest private bus system in America, in terms of the number of people we move," Schmidt said. "And it's the only way to deal with the fact that we want our people here and in a couple other locations."

The buses have become controversial over the years. They are a stark contrast to the options public transit riders face.

More options means more money. The Federal Highway Trust Fund will run out of money in May. If congress doesn't act, Foxx says new options need to be considered.

"We're going to see more private sector investment in infrastructure over the next 30 years, I expect, and that's partly because we are in such a hole with our own infrastructure," Foxx said.