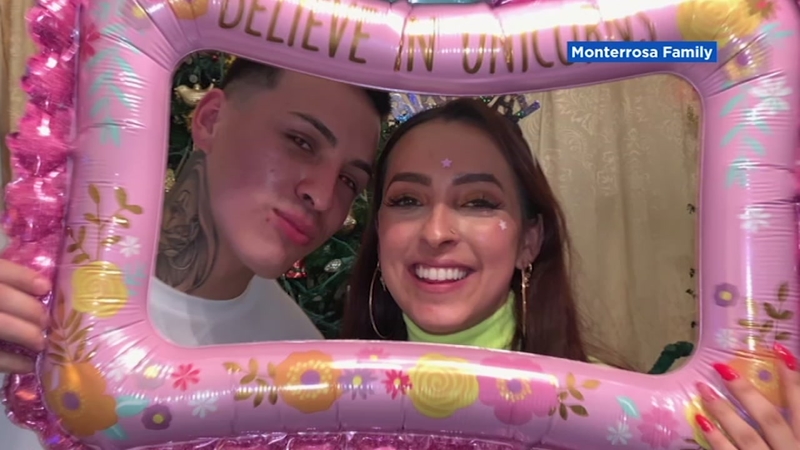 SAN FRANCISCO (KGO) -- For the first time Thursday night, we heard from the family of a San Francisco man who Vallejo police shot and killed early Tuesday morning outside of a Walgreens.

Officers were responding to a looting call. 22-year-old Sean Monterrosa was on his knees. The Vallejo police says the officer who killed him thought he had a gun. It turned out to be a hammer.

Sean Monterossa's sister says he carried a photo of his family in his wallet for years; Sean in the middle sandwiched by his big sister and baby sister; his parents standing above the three siblings each separated by two years, who say they've always felt more like triplets.

Vallejo Police shot and killed a 22-year-old following a night of looting early Tuesday morning. On Wednesday, Chief Shawny Williams said Sean Monterrosa was on his knees and an officer saw what appeared to be a gun in his sweatshirt. It turned out to be a hammer.

The girls are now without their only brother.

"I love you, I love you too, we're going to get justice," said the sisters to each other while hugging.

They don't know why Sean was in Vallejo Tuesday at 12:30 am outside a Walgreens, they only know what police are telling them - That while officers responded to call for looting, Sean appeared to be running to a getaway vehicle then suddenly stopped and knelt before placing his hands above his waist.

Vallejo Police Chief Shawny Williams says an officer thought he saw the butt of a handgun. It was actually a hammer tucked into the pocket of Sean's sweatshirt. The officer fired 5 times through his vehicle's windshield. One bullet struck and killed Sean Monterrosa. He was 22 years old.

"I cried. I cried because no one deserves that. He was surrendering," said Michelle Monterrosa.

"Barely raising his hands and midway they shot him," said Ashley Monterrosa.

VIDEO: Vallejo police announce at news conference that 22-year-old killed by officer had a hammer, not a gun
EMBED More News Videos

At the time he was shot, Monterrosa was on his knees, the police chief said.

It was the day before Ashley's 20th birthday.

"They executed him, there was no reason for them to kill my brother like that," said Monterrosa.

Sean's sisters say Vallejo police didn't call them, his girlfriend did. Then they told their father.

"She got the phone call and they say, Sean is dead. I started crying," said Neftali Monterrosa, Sean's father.

"I called my wife after that and she was very strong," he continued.

"She says she feels blessed, she feels strong, she knows God is with us," said Ashley Monterrosa.

In a press conference Wednesday Chief Williams said the officer who shot Sean is an 18 year law enforcement veteran. Chief Williams was asked but would not give the officer's name. He said the department has 45 days to release body worn camera video and would do so even sooner.

Sean's sisters want everyone to know what you won't see in that video, that Sean loved to read, started working at a young age and was involved in groups like the Boys & Girls Club and Horizons Unlimited which serves Latino youth.

Sean's last message to his sisters was a group text, approximately 41 minutes before the shooting, asking them to sign a petition for justice for George Floyd.

The family has created a change.org petition here.