'Firenado' vs. 'fire whirl' - an expert explains the difference

KGO
By David Louie
SAN JOSE, Calif. (KGO) -- The Camp Fire is serving as a field study for faculty and graduate students at San Jose State University's Fire Weather Research Laboratory. They encountered the same phenomenon that ABC7's Laura Anthony captured on her cell phone: a thin, tall column of flames that resembled a fire tornado.

Fire weather scientist Craig Clements and two of his San Jose State graduate students were on site at the Camp Fire, which began Thursday, collecting data to learn more about wildland fire behavior.

The downslope north winds were very strong and very dry, making conditions even more serious as flames raced down the canyons and began to destroy what used to be the town of Paradise.

"Because the wind's so strong, it actually can move the flames. ... It pushes the flames closer to the fuels and also can cause the spots to move farther, so it's spotting and moving really really fast," Clements.

He said he saw two dramatic scenes: a swirling column of flame that resembled a small tornado, similar to what was captured by ABC7 News reporter Laura Anthony on the fire line.

"We call that a fire whirl because it's a smaller scale than something like the fire tornado that occurred at the Carr Fire," Clements said.

"Fire whirls are aren't as strong as a tornado and they aren't as large in diameter or scale in both height and in width. They spin for a while, rotate and then dissipate quickly. So they don't really indicate any more damage until their size gets really, really large," Clements said.

Stands of trees in the area helped to spread the fire, especially the gray pine.

"Gray pine when they burn they get really explosive," Clements said. "We're seeing flames heights of over 100 feet right next to the road, and so when they get explosive like that, they burn, they eject a lot of embers, and those embers can start new fires, so it kind of propagates like that." 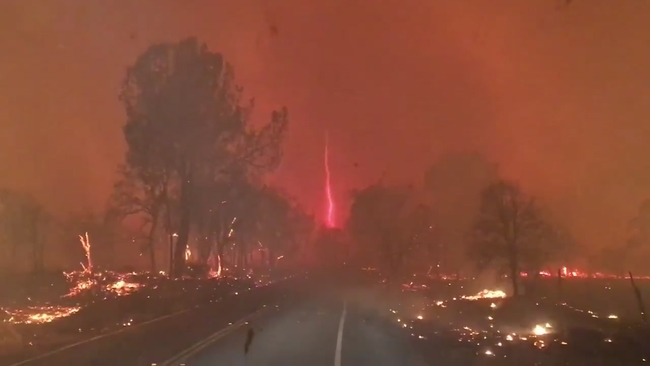 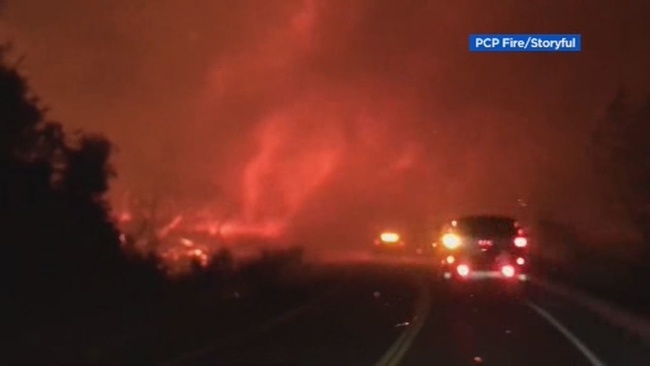