KGO
By Amy Hollyfield
SAN ANSELMO, Calif. (KGO) -- A strong storm is now moving into the Bay Area. The storm ranks a 3 on our Storm Impact Scale and has triggered a Wind Advisory, Flash Flood Watch and Coastal Flood Advisory to part of the region.

A Flood Warning has been issued in Sonoma County for areas near Mark West Creek and Laguna de Santa Rosa until 8:30 a.m. Friday.

The storm in the Bay Area and another major storm on the East Coast has triggered more than 100 flight cancellations at San Francisco International Airport.

The downpours started around 6:30 a.m. in San Anselmo and haven't stopped. Marin County is seeing a lot of rain and wind, making it very uncomfortable to be outside.

"Part of me loves it and part of me just wants to just get home right real quick," Fairfax resident Nancy Clothier said.

San Geronimo Valley Drive was closed at Sir Francis Drake Boulevard in Woodacre due to a tree into a power line.

The wind also knocked down the road closed signs.

San Anselmo Creek was rushing through the downtown area but at normal levels, somewhat of a relief for Ross Valley firefighters.

A lot of kids have the day off from school after classes were canceled at many campuses in Marin County because of the storm. That means many parents also had to take the day off.

A couple of districts have announced closures including Kentfield, Mill Valley and the Tamalpais Union High School District. Many private and Parochial schools in Marin County have also canceled classes.

San Anselmo Creek is rushing but at last check, was still 8 feet below flood stage. The Marin County Sheriff's Office has doubled patrols on Thursday for the storm.

They say there are no big problems but it's still early. 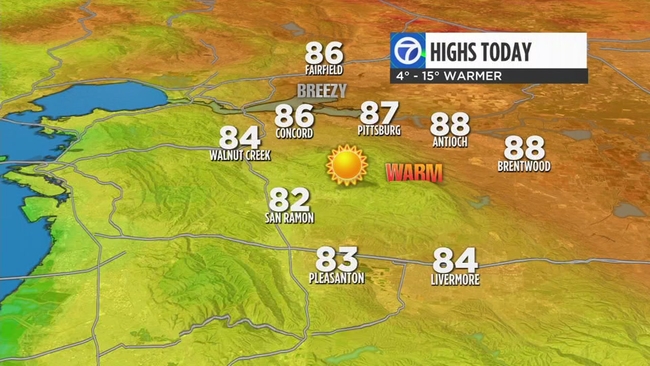