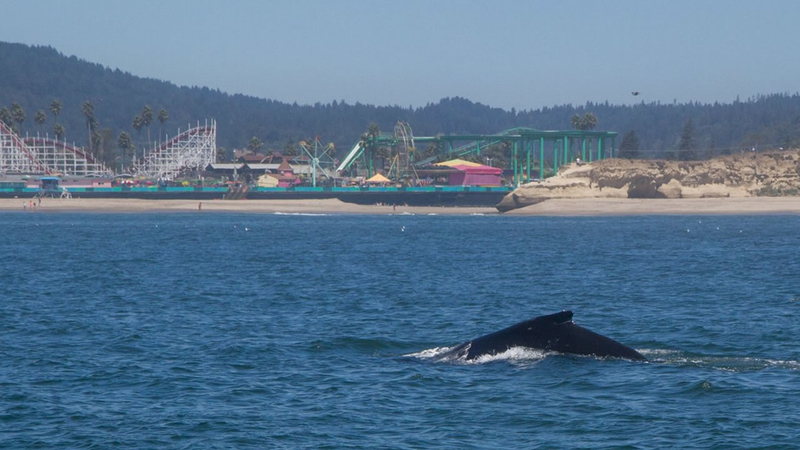 SANTA CRUZ, Calif. (KGO) -- It's a given that when you book with Santa Cruz Whale Watching Tours, you're no doubt interested in seeing the whales that come to Monterey Bay for the anchovies and other fish. However, Capt. Ken Stagnaro, who operates the tour boat Velocity out of Santa Cruz Harbor says a growing number of customers - about 20% -- are asking if they'll get to see sharks.

The white sharks you've been hearing about, which kayakers and surfers have encountered, can often be found just a quarter-mile off Aptos between the cement ship at Seacliff State Beach and New Brighton State Beach.

San Jose firefighter, fisherman and avid marine observer Eric Mailander says he sees at least six to as many as 20 at a time, and he has drone video to prove it.

ABC7 News joined a group of 65 locals and tourists from as far away as Michigan and New Hampshire on an overcast Thursday aboard the Velocity in search of those sharks.

Naturalist Megan Petersen, who educates the tour takers aboard the boat, tells us the white sharks are young. They're sometimes called juveniles.

They're commonly six to eight feet long and occasionally larger. At that stage of their development, they're focusing on fish for food.
They will hunt for sea mammals to eat later as they grow and mature. So, any encounters with humans, she says, tend to be benign. They're curious about their environment and the kayaks, paddleboards, and boats that share the water.

The waters off Santa Cruz Harbor are also home to whales, and we quickly see evidence of humpbacks, their backs arching above the water line. The passengers on the tour boat shriek with excitement when the whales raise their tail fins or flukes designed for propulsion.

Why white sharks are hanging off Santa Cruz and delighting tourists aboard boats. Dramatic video at 4:55pm. #abc7now pic.twitter.com/aVrlHdD88Z

The water on their fins glisten, even under overcast conditions, as the drops fall back into the sea like glistening crystals. This is all happening less than a half mile offshore, giving kayakers a front row seat to the spectacle.

The Velocity, under the command of Capt. Kris Victorino today, tries to get close to the whales for viewing but within a margin of safety, not knowing where the whales will surface next.

Then, it's time to navigate to another location in search of white sharks.