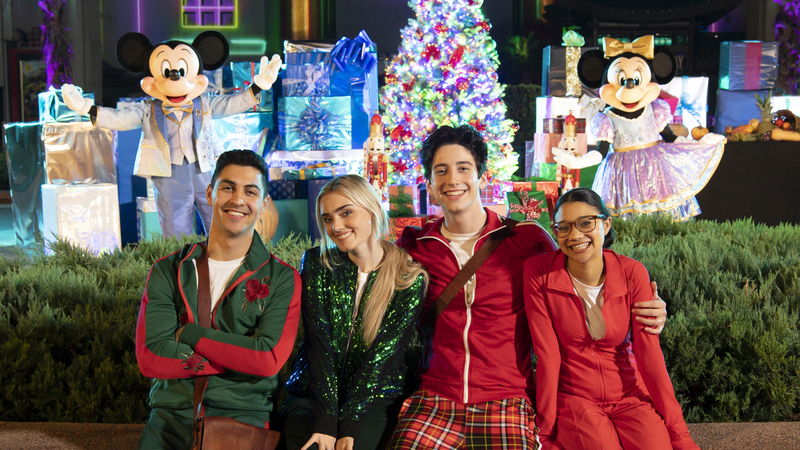 NEW YORK -- What happens when a dodgeball-loving executive producer teams up with one of the most fun hosts ever? "Disney's Holiday Magic Quest" that's what!

"I was obsessed with the idea of professional dodgeball," executive producer Art Spigel said. "I love fun, I think I love these oversized goofy games that we all kind of get to play. I think for me in my work I'm so often trying to channel everyone's inner child and get everyone to play and have fun and forget their everyday worries."

"We really got to play in Star Wars and Toy Story in a way that hadn't been done before," he said.
Milo Manheim, Kylee Russell, Meg Donnelly, and Trevor Tordjman will be divided into two teams to compete against each other in a high-stakes holiday adventure.

"They are so game for everything that I threw their way, some of it was a little weird or scary or unexpected, the fact that parts of the park come alive unexpectedly, so they were really ready and game and they gave their all," Brown said.

"Obviously they are huge fans of Disney and they were really themselves, the beauty of this was it was a true competition, so they didn't have any lines, they didn't have anything to do, we really dropped them into Disney World so they could have this adventure," Spigel said.

They need to find the pieces of the holiday star that Maleficent has hidden around the park. Only once reassembled and put back on top of the tree will magic be restored to the Disney park.

"The challenges themselves were really just allowing our contestants a way to step into these stories and these worlds in a way that they never had before or that guests couldn't," he said.

Brown said that she jumped at the chance to be a part of this Disney special.

"Anytime Disney calls me for anything it's an absolute yes, but I absolutely love the holiday season, to get to be a part of something that celebrates the magic of the Disney resorts, celebrates its 50th anniversary, and then you get to see some of the behind the scenes stuff with the cast of 'ZOMBIES' as they go through these great parts of the park, it was awesome," Brown said.

"Yvette was amazing, she brought a lot of fun energy to the show," Spigel said. "We shot all the action in Disney World and Yvette kind of helped us put everything together and make sure everything flowed."

"He's very kind because I would say the same thing about him!" Brown said.

The stars will make their way through a variety of obstacles set amongst Walt Disney World attractions inside Hollywood Studios.

"I felt like a fan watching it unfold, even though I knew a little bit about what their next challenge would be," Brown said.

Don't miss "Disney's Holiday Magic Quest" on Friday, December 3 at 7 p.m. EST/PST on Disney Channel. It will also be available to stream on Disney+.