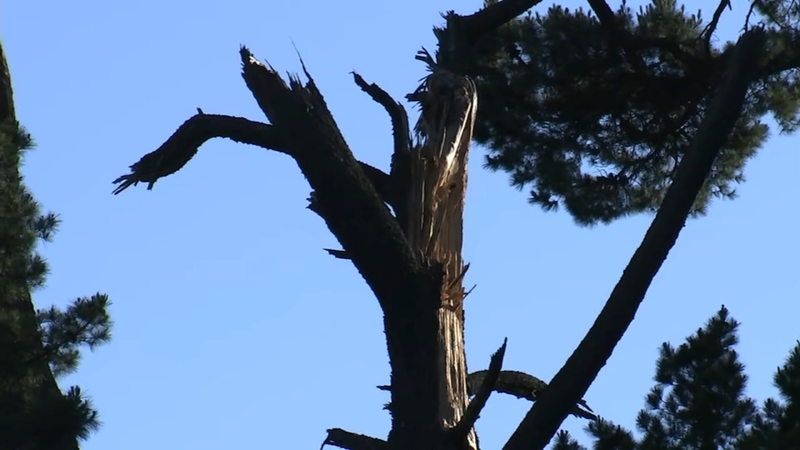 ALAMEDA COUNTY, Calif. (KGO) -- There is now a red flag warning in effect in Solano County, fire season is nearly upon us, and firefighters are saying '"beware." They're also highlighting a growing problem - dead trees.

Monday we flew our SKY7 chopper above the East Bay Hills. While what we saw may not look concerning to you, look closer and you'll see dead trees in some areas, something that is alarming to firefighters in the East Bay Regional Park District, which covers 123,000 acres in the Bay Area.

"When you have trees that are dead and standing like that, if they do catch fire, the danger is that they're going to throw embers aloft up in the wind," says East Bay Regional Park District Fire Chief Aileen Theile.

Chief Theile says there are 1,000 acres of dead trees scattered amongst the brush in their park land, located in Alameda and Contra Costa Counties. The park service has been working to remove them, but will up their efforts next week in Redwood Regional Park.

Some of the dead trees are in Tilden Regional Park.

Some people we talked with don't notice any major differences.

"It's a little bit drier than it normally would be but in general, nothing too different than a usual year," says Andrew Coulter of San Francisco.

Others do notice changes that have come earlier in the season.

"The fuel is everywhere you walk, it will just take a little spark and the whole place will go up, even when you have some greenery around you that doesn't mean that there isn't a dead plant around it," says Amanda Herr who lives in the East Bay.

And while you might not notice all of the changes being seen, crews out there say they do, and it's one of the reasons that fire season will officially be starting more than a month early this year.

"This is the kind of weather pattern that we're really worried about over the next several months in California because you got very low relative humidity, a wind out of the north that is typically hotter drier air coming off the continent, and there's just not a lot of humidity in the air," says Chief Theile. Theile also says that while those dead trees are concerning, the amount of moisture in live trees, or lack thereof it, is also a danger as we approach fire season.