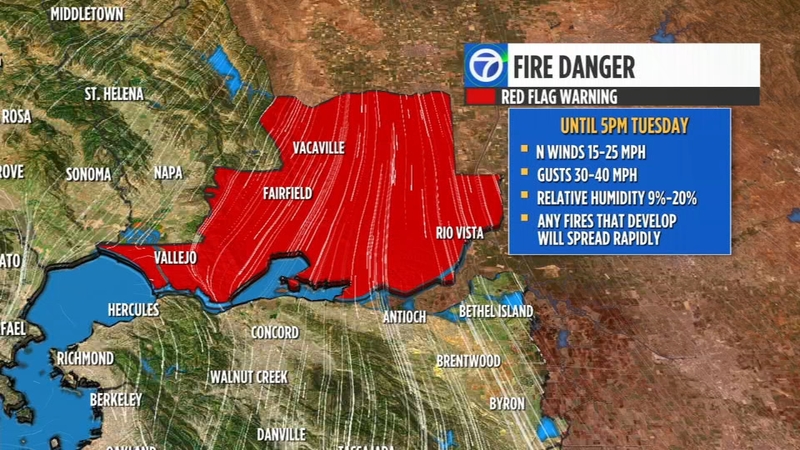 SAN FRANCISCO (KGO) -- It's only May, but Bay Area firefighters are already preparing for an early start to the fire season. Gusty winds, low humidity and warm temperatures in the 80s and 90s are prompting a Red Flag Warning in Solano County and the Central Valley.

"We have northerly winds that are very dry," explained Nicco. "They are drying everything they blow across, kind of like a hairdryer. The grass that's already near-record dry levels of moisture are getting more brittle and tender, easier to ignite and with those fast winds blowing out of the north at about 40 miles per hour --- it's a lot easier to spread. We have to be careful."

RELATED: Grass fires in early May have North Bay firefighters on edge

Solano County has been placed under a Red Flag Warning until 5 p.m. Tuesday.

"The rest of us are under heightened, not critical, that's why we are not under a Red Flag Warning," added Nicco. "Here are some tips. You want to avoid activities with open flames, properly discard cigarettes, keep your vehicle or anything hot off the dry grass and if you see something call 911 quickly."

Fairfield, Concord, Antioch and Pittsburg reached at least 90 on Monday.

RELATED: 85% of CA is in severe, extreme, or exceptional drought, latest numbers show

"We are going to have the same setup Tuesday with dry, hot winds," said Nicco. "But as we head into Wednesday we will start to pull the marine layer back on and that will bring cooler weather and more humidity. The fire threat will be over. But until then, please be vigilant."