Multiple agencies are involved with this case. The cop arrested, Officer Derrick Antonio, is on paid administrative leave, and police tell us they're still looking for six additional suspects.

This undated image shows Officer Derrick Antonio, who was arrested during "Operation Gang of Thrones" in San Jose, Calif.

Police say it's the culmination of a five month long investigation. The major bust netted the arrests of 23 members and associates of a San Jose criminal street gang.

But perhaps the biggest blow was Antonio's arrest, a 9.5 year veteran of the San Jose Police Department. He's accused of providing confidential law enforcement information to members of that gang.

"His acts were deplorable and in no way represent the character of the remaining members of this department who, under extraordinary circumstances, protect and serve this city with great honor," said Chief Eddie Garcia.

Mayor Sam Liccardo added, "As soon as it was discovered the first indication that there was a police officer who was involved in this crime, I did everything it could do to ensure that he was immediately taken off the force."

Thirty-four search warrants were served Tuesday in multiple South Bay cities, as well as Anaheim and an undisclosed location in Louisiana.

This undated image shows more than $200,000 in U.S. currency that was recovered during "Operation Gang of Thrones" in San Jose, Calif.

The gang is believed to be involved in numerous crimes including assault, extortion, narcotics, book making, and public corruption.

Among the items seized in the bust were handguns, vehicles, illegal gambling machines, and more than $200,000 in U.S. currency.

Investigators also recovered more than 4,000 ecstasy pills and 600 pounds of marijuana, as well as Xanax, molly and illegal steroids.

This undated image shows an alligator that was recovered during "Operation Gang of Thrones" in San Jose, Calif.

Also taken into evidence was an alligator.

The suspects, many of whom are of Vietnamese descent, range in age from 19 to 52. 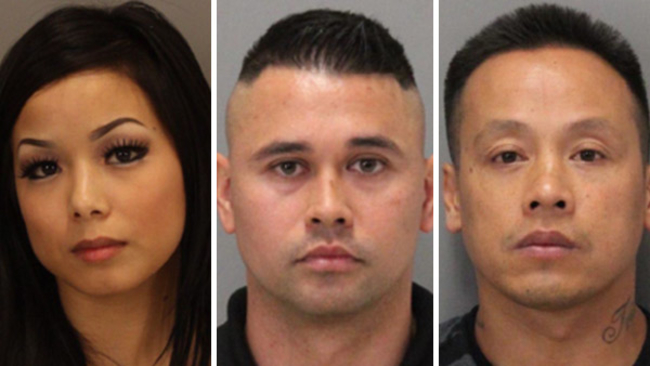