KGO
OAKLAND, Calif. (KGO) -- Monday's supermoon is closer to the Earth than at any point since the late 1940's and it's the last chance to see the brightest super moon in decades.

Visiting from Minnesota, Tom and Diana Gagner say the best sightseeing of their whole trip was out their hotel window.

"It flooded the whole street and the balcony, and it was awe inspiring," Tom Gagner said.

VIDEO: Shots of the supermoon from around the Bay Area

The scientific name is a mouthful.

It's the biggest supermoon since 1948. Even the tides are a few inches higher because the moon is so close.

"I did a little homework and found that it was about 30 miles closer in 1948, which is not big," Burress said.

It's 221,000 miles away, so you won't be grabbing yourself any moon rocks. But it's the best view you'll ever get from Earth.

"This is a good opportunity to remind yourself really how beautiful it is," Burress said.
Super moons happen because the moon's orbit isn't perfectly centered around the earth. When there happens to be a full moon at this end of the orbit, the moon doesn't just look closer, it is closer.

"One of the things you're going to notice is the dark areas of the moon. The dark areas are actually old lava flows," said Chabot astronomer Gerald McKeegan.

The spots that create the man in the moon are one thing you can see with a telescope that's over a century old. The Chabot Space and Science Center opened it up after hours for the public to peek at the moon.

"It's the first astronomical object that scientists can really explore with telescopes, when telescopes were first developed," McKeegan said.

McKeegan says there's a lot about the moon that remains a mystery.

"The moon is magic. And if my wife likes it, that's really good enough for me," Tom Gagner said.
Related topics:
scienceoaklandmoonsupermoon
Copyright © 2020 KGO-TV. All Rights Reserved.
RELATED 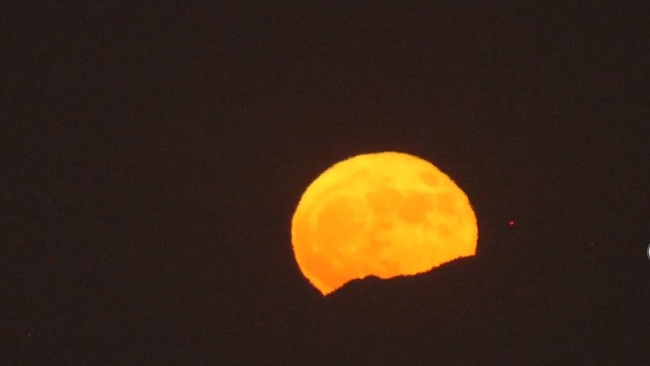