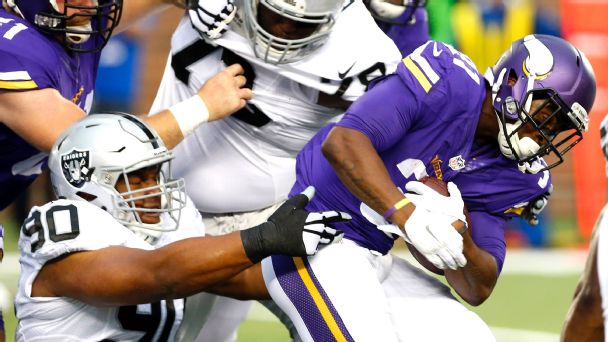 The Raiders now have an estimated $32.1 million in cap space, per ESPN Stats & Information, as they work on contract extensions for quarterback Derek Carr, edge rusherKhalil Mack and right guard Gabe Jackson. The team also is still in talks with retired running back Marshawn Lynch.

Listed at 6-foot-2, 330 pounds, Williams reported to training camp last summer out of shape and his production dipped from 2015, when he signed a four-year, $25 million contract with $15.2 million in guaranteed money.

He played his first five seasons with the Arizona Cardinals, who selected him with the No. 26 overall pick of the 2010 draft out of Tennessee.

After starting 15 of 16 games for the Raiders in 2015 -- when he had a career-high 48 tackles with a sack, a fumble recovery and three stuffs -- Williams started 11 of 16 games last season and had a career-low 17 tackles to go with a half-sack.

The Raiders had a league-low 25 sacks last season. Williams and Stacy McGee, who had 3.5 before departing for Washington in free agency, provided the only sacks from the defensive line's interior.

With the draft scheduled for next week, the Raiders still have needs at interior pass-rusher and inside linebacker.