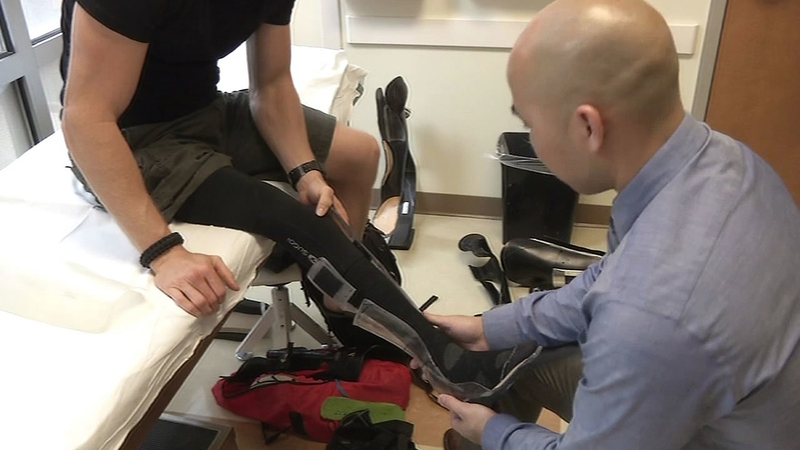 SAN FRANCISCO (KGO) -- A Bay Area center that's changed the lives of thousands amputees, is having the same impact for athletes and others who are battling to overcome severe injuries.

Max Conserva is an example. Watching him train for race, you'd probably never guess there was a time when just walking normally looked like a challenge. Max was 8 years old when a semi-truck struck his bicycle.

"My knee cap, on the outside got shaved off, so this is bone, LCL, two of my quads," Conserva explains.

Doctors saved his badly damage right leg, but the injury resulted in growth deformities and other challenges. They're challenges that Conserva decided to meet head on several years ago.

"I'd taken some time off work, really began to look at my injury in totality and started to try certain things I'd never tried before," he says.

To cross the barriers left from his injury, Conserva began working with Richard Nguyen, CPO, and the team at UCSF's Orthopaedic Institute, designing and testing high tech braces that could allow him to run, swim, ski and much more. While groundbreaking advances in prosthetic limbs have allowed disabled athletes to compete on the world stage, Nguyen says braces present a different challenge.

"The challenge is that you still have the whole limb there. So you can't just put whatever new, fancy device that's been developed, you have to accommodate what's already there and still try to add to it," Nguyen said.

The UCSF team starts with a mold of Conserva's leg and creates prototypes layer by layer. Finishing with high-tech materials like carbon fiber that can hold Conserva's leg steady and still be flexible enough to allow the movement required by competitive sports. Conserva provides feedback both on fit and alternative designs.

"I stepped into UCSF kind of the first day with like, 'Here's a bullet-point summary of what I think we can do and things I'd like to try,' and that's where we started," Conserva remembers.

The results have allowed Max to pursue a startling array of sports from running to swimming and snowboarding. It's a collaboration that's almost as rewarding for the UCSF team as it is for Conserva.

"The fun part in seeing a problem and finding a solution, trial and error, research and design, and just seeing him reach his potential. When we get victories, they're small, but they feel huge," says Nguyen.