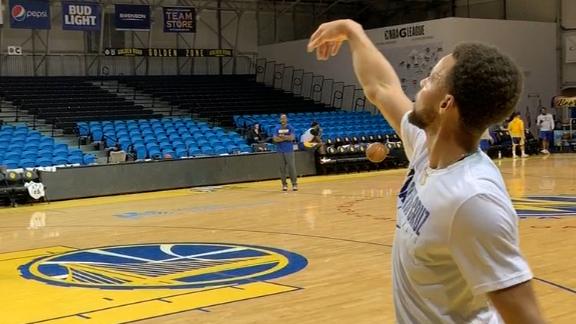 After beating the team that won the NBA championship last season, the Denver Nuggets figured to have an easier time against the one that lost in the 2019 finals on Tuesday night.

But not so fast.

Following Sunday's 133-118 win over the shorthanded Toronto Raptors, the Nuggets host the Golden State Warriors, owners of the NBA's worst record. But a day before the scheduled matchup, the Warriors on Monday recalled guard Stephen Curry from their G League affiliate in Santa Cruz, Calif., just hours after sending him there to practice.

As of yet, there is no timetable as to when the two-time NBA Most Valuable Player will actually play his first game for Golden State since breaking his left hand on Oct. 30.

The Warriors announced Saturday that the six-time All-Star and three-time NBA champion "remains on-schedule for a return to play at some point in March." Curry, who turns 32 on March 14, averaged 20.3 points, 6.5 assists and 5.0 rebounds in four games this season before the injury.

"It will make a big difference, especially for people who can drive and attack the basket because Steph attracts a lot of attention," Andrew Wiggins told reporters recently.

Even if Curry isn't able to go Tuesday, the Warriors don't figure to be a walkover for Denver.

The Nuggets have had a penchant for letting up against inferior teams this season, including home losses to Atlanta and Cleveland and road defeats to Detroit and Washington. This habit was also apparent on Jan. 16, when the Warriors took the Nuggets to overtime before falling in San Francisco.

A victory that night would have been a rare one in what has been a long stretch of futility Golden State. The Warriors have lost 24 of their last 28, including separate losing streaks of eight and 10 games. They are coming off a 124-110 loss to the Washington Wizards on Sunday night in the game the team originally hoped would mark Curry's return.

Denver probably doesn't mind Curry's delayed return. The Nuggets are locked in a battle with the Los Angeles Clippers and surging Houston Rockets for the second spot in the conference. The Clippers routed Denver on Friday night but the Nuggets bounced back against Toronto on Sunday night, getting another triple-double from Nikola Jokic, his 12th this season.

Denver played without forward Paul Millsap due to a sprained right ankle suffered in Friday's game. The Nuggets didn't practice on Monday and there was no update on his status for Tuesday.

Other than Millsap, Denver is at full health and apparently got a wake-up call from the loss at L.A. The Nuggets didn't dwell on the 29-point blowout but rather responded with one of their best games of the season in a 133-118 win over Toronto.

"That's just part of the game," Nuggets forward Torrey Craig said Sunday night. "There are games when you lose. There's going to be tough losses, there's going to be emotional losses, but that's part of playing in the NBA. You have to learn from the last game and I think that's what we tried to do."

No player bounced back better than Gary Harris, who went 6-for-7 from the field (3-for-3 from 3-point range) for 15 points against the Raptors after shooting just 31.3 percent in February.