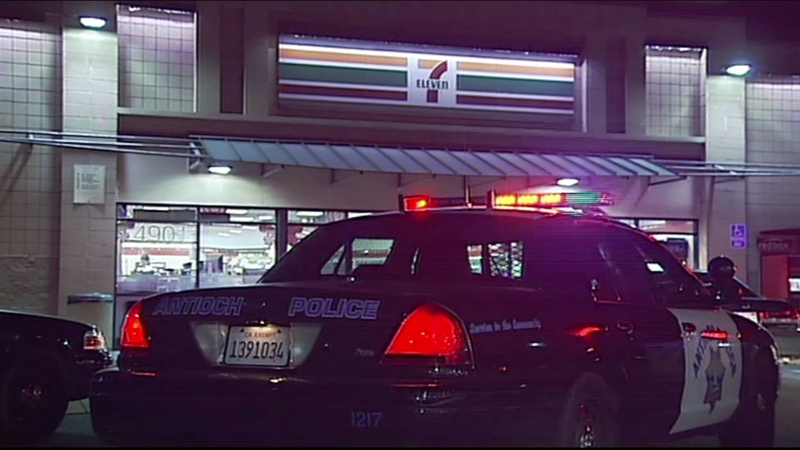 Clerk shot in robbery at 7-Eleven in Antioch

ANTIOCH, Calif. (KGO) -- Antioch police are releasing new information about an armed robbery at a 7-Eleven that sent one clerk to the hospital with gunshot wounds. Another clerk is thanking his lucky stars that he wasn't hurt.

"He just pulled the gun on me," said 7-Eleven clerk Sam Singh.

Singh is feeling very shaky today after having stared down the barrel of a gun while working the overnight shift at 7-Eleven in Antioch, but he's also feeling incredibly lucky to be alive. The gunman shot his co-worker and then tried to shoot him.

"My co-worker fell on floor screaming 'I am shot!' They tried to shoot me again, but there was some problem with the gun, it clogged. I gave him all the money in the register and he took the money and left," said Singh.

Just got a first hand account of an armed robbery from a 711 clerk who was held at gunpoint. The gunman tried to shoot him- but gun jammed.

The store manager was heartbroken this happened to his team.

"For me it doesn't make any sense, killing someone for a couple dollars, we don't have any money, maybe $10, $20, maximum $40," said Surjeet Virk, store manager.

The victim survived the gunshot. He was taken into surgery and is expected to be ok. He's described as a young man in his early 20's.

"He just came from India. He's a hard working person. He works at least a 10 hour day, so does it make any sense for somebody to shoot him," said Virk.

Antioch police announced they spotted a car shortly after the attack believed to have been involved-stopped the car-and took two people into custody. Witnesses tell us it was a young man and woman. Loyal customers who see these clerks everyday we're stunned to hear about the robbery.

"I would think nothing like this would happen I lived here ten years I come here a lot I am surprised to hear about this pretty bad," said Ferdinand Munar, customer.