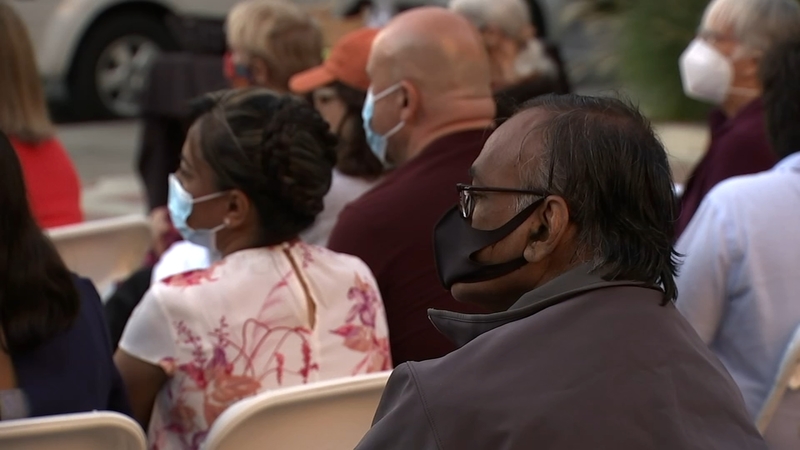 PALO ALTO, Calif. (KGO) -- In Palo Alto, over a hundred people gathered to honor the victims of 9/11.

"I want people to heal a little bit and sow the seeds of friendships. If we are truly going to be a united nation we will have to get together and get to know each other," said Samina Sundas, founder of American Muslim Voice Foundation.

In the crowd strangers shared a meal and bonded over the need for unity regardless of background.

The Tribute in Light shined brightly over NYC, marknig 20 years since the 9/11 terror attacks.

"When Sept. 11 happened there was intense backlash especially against the Muslim community. It's so important for us to come together as a group and as a community here," said Donna Baranski-Walker with Rebuilding Alliance Org.

"Christians, Jews, Muslims, Hindus and everybody of all colors, likes, face, can come together," said Palo Alto Resident, Mark Thomas.

E'Jaaz Ali, former FBI agent and member of the Terrorism Task Force Agent spoke about the trauma this day resurfaces.

"9/11 is actually triple difficult for me because not only did I lose thousands of Americans on the day of but I also lost thousands of soldiers and military personal during the 20 year war that followed," said Ali.

Watch the beginning of the September 11 remembrance ceremony.

Every 9/11, this event hopes to unite the community with a message of hope and inclusion with religious leaders coming together.

"Islam wants love and caring about each other. That is what Christianity wants. That is what Jewish and Hindi people want," said Sunda.

Rabbi Jonathan Prosnit with the Congregation Beth Am was living in New York City during the 9/11 attack.

"There was nothing like New York the days after 9/11. People coming together, hugging of all different races, religion and sexual orientation and to be able to feel part of that here in California 20 years later is remarkable," said Rabbi Prosnit.