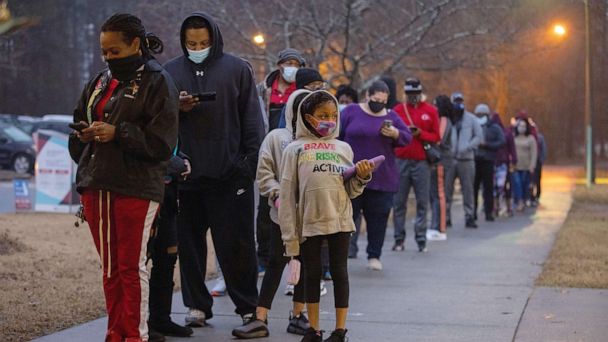 More than 3 million Georgians have already voted in the Jan. 5 runoff election, a figure that both smashes the previous turnout record for a statewide runoff in the Peach State and exemplifies the urgency of the dual Senate runoffs that will determine which party controls Congress's upper chamber.

According to Georgia Votes, which is analyzing data from the secretary of state's office, 3,001,017 voters had cast ballots in the runoff election following the last day of the three-week advance in person voting period. Of those votes, 928,069 are absentee by mail and 2,072,948 are from in-person early voting.

Hundreds of millions of dollars have been raised and spent by the candidates, political parties and outside groups, putting the matchups between Republican Sen. David Perdue and Jon Ossoff, and Republican Sen. Kelly Loeffler and Rev. Raphael Warnock on a national stage.

Top surrogates for both parties have traveled to Georgia to campaign for the candidates, and will again in this final stretch. President Donald Trump will headline a rally in Dalton Monday night after Vice President Mike Pence stops in Milner that afternoon; Vice President-elect Kamala Harris and President-elect Joe Biden will campaign with the Democratic candidates on Sunday in Savannah and Monday in Atlanta, respectively.

But Republicans are a man down, as Perdue's campaign announced that the senator would be quarantining after coming in "close contact" with a member of his campaign who tested positive for coronavirus. He and his wife both tested negative for the virus on Thursday, according to his campaign. Just a day before he had to cease campaigning, Perdue made his 100th stop of his "Win Georgia, Save America" runoff campaign tour. He was planning to make an additional 25 stops through Election Day, according to a press release from his campaign.

Even without one of their candidates on the ground, Republicans are not letting up their get-out-the-vote effort, and they can't afford to as concerns that false rhetoric coming from Trump and allies of a "rigged" general election will suppress Republican voter turnout still persist among the GOP.

"I need you to call five friends, family members, co-workers, frenemies -- whatever. Five calls or texts today about voting will keep the liberals away. That's right. Five calls a day keeps the liberals away," Loeffler told a crowd of supporters at a New Year's Eve concert rally in Gainesville.

Turnout is lagging compared to this point in the general election, when approximately 3.65 million Georgians had already voted, but it's higher than ever before for a runoff election, breaking the previous record of 2.137 million in 2008.

Voters still have days to return their voted absentee ballots and a full, 12-hour day of in person voting on Tuesday, when Election Day polling precincts will be open across the state's 159 counties.

Key to winning runoff elections is getting candidates' supporters who voted in November back to the polls again. Historically in Georgia, Democrats have fared worse than Republicans at doing this -- Since 1992, Democrats have never won a statewide runoff in the Peach State, even when their candidate had more votes in the general election.

But this runoff could be determined by voters who didn't even participate in the November election.

According to Georgia Votes, 115,389 voters who've cast ballots early for the runoff did not vote at all in the general.

Perdue's lead over Ossoff in the general election was 88,098 votes, and Libertarian candidate Shane Hazel received nearly the exact same number of votes as the number of new voters participating in the runoff. Because these Senate races are so tight, how these votes split could make all the difference.