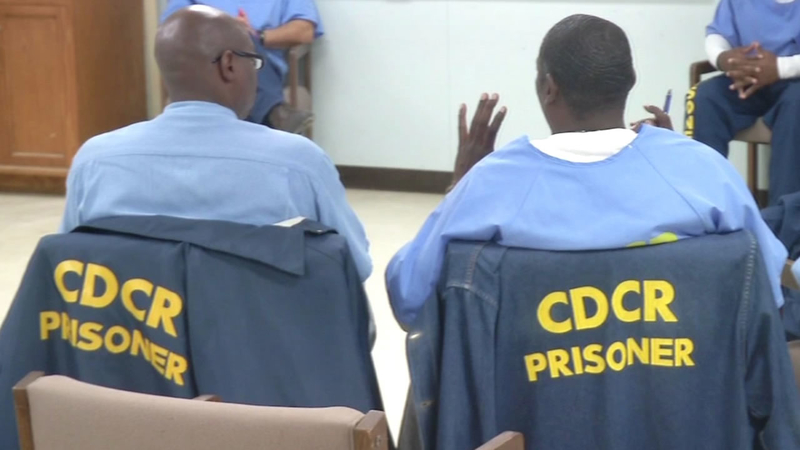 Alliance program tries to stop parolees from returning to prison

MARIN COUNTY, Calif. (KGO) -- There are 3,000 people that are paroled from California prisons each month. Nearly two-thirds of those released will end up returning to prison. A unique program at one of the state's most infamous prisons is hoping to break that cycle, and it was the inmates' idea.

Inside San Quentin, prison is an isolating place, but in a tattered building across the prison yard, there is there is hope for what lies beyond the prison walls.

Inside, inmates are learning to understand the social reasons for their incarceration. Most of the men in the program are serving lifetime sentences with the possibility of parole.

Inmate Sha Wallace-Stepter says, "This program is one of the only places to where guys of every different nationality, ethnicity, religion, can come together and can hold conversations that revolve around race and gender and class and within a prison, this is basically unheard of."

The program is called the Alliance for Change -- a non-profit started in 2008 by a group of incarcerated men at San Quentin. They were frustrated people were leaving prison without the resources, or understanding they needed to succeed on the outside.

"Does anyone have any ideas how we should give these out?" said inmate Martin Walters. He's leading the discussion.

"Me and Sparky we participated, we raised our hand and we spoke, I think we contributed to the class," chimed one inmate.

"Were all over here scavenging for 11 cookies when there are 14 of us, when realistically how many people actually deserved the cookie?" said another inmate.

Another questioned, "Maybe it would be better if no one got any cookies. We would have never had to worry about it at all. We were doing fine, and the cookies actually created an inequality among us."

The exercise is just one of the many used to help inmates understand the social issues at the root of incarceration.

"Everybody's voice is being heard," said Isaiah Thompson, one of the Alliance for Change's founders.

"What I hope is that people will learn that they have a stake in the community abroad, in that through civil engagement, they will become a part, more of a part, a positive part of society," said Thompson.

Many inmates say the program has changed their lives.

Inmate Christopher Deragon said, "We've all taken so much from our communities and it is about recognizing that, it is about growing up, being accountable, and being responsible human beings, and learning how to be a real man."

"It's a program that is both inside and outside of the prison, now. At the time when we started, none of our members had parole," said Richman, "We were operating completely on the inside. And I am happy to say, that we now have 18 folks out in the community who are continuing this work."

Prison officials say that is a true testament of the program's success. Not one of the inmates who has been paroled after taking part in the Alliance for Change's program has gone back to prison.

California Department of Corrections and Rehabilitation spokesman Samuel Robinson said, "You have men who've developed beyond many of the perceptions that the public may have of men behind the walls, these are guys who are preparing themselves for a better world."

A future these inmates hope, will soon lead to a life beyond the prison yard.