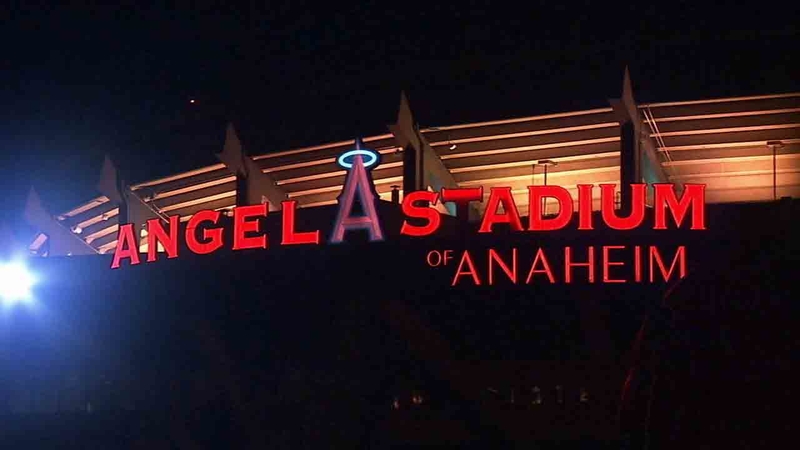 ANAHEIM, Calif. -- The beating of an Angels fan after Friday's game was likely not motivated by team rivalry. Police say say both the victim and the suspect were dressed in Angels gear.

Though the identity of the victim has not been released, Eyewitness News has learned the 43-year-old victim is a U.S. Marine veteran of Huntington Beach and a father of three.

In earlier reports, Eyewitness News identified the victim as a current Los Angeles Police Department officer. However, the LAPD released a statement early Monday morning that the victim is not an LAPD officer.

The victim was assaulted as he walked with a family member to their car after the Angels' playoff game against the Kansas City Royals around 10:30 p.m. Friday.

The victim, a diehard Angels fan, was attacked for no apparent reason, Lt. Bob Dunn said.

In an exclusive interview, a mother and daughter, who witnessed the beating, say the suspect struck without warning.

"It was a random attack, it looks like, there was no arguing, there was no yelling. It was all just really surprising," one 15-year-old witness said, who only wanted to be identified as Morgan.

"The guy ran up on him from behind," said Morgan's mother, Sandra. "No shouting, nothing, it was just really quick, 'boom, boom, boom,' and then the guy went down. He got him really good and then he ran off."

Two other suspects allegedly ran off with him. The incident occurred so fast that Morgan and Sandra say they were unable to get a good look at the suspect.

The victim was rushed to UC Irvine Medical Center in Orange, where he remains in critical condition on life support.

The Los Angeles Angels of Anaheim are cooperating with Anaheim police as they search for the suspects and an answer for the brutal attack.

In a statement to Eyewitness News, the team said, "the safety and fan experience is the focus of our organization. It's an unfortunate incident. We wish the gentleman and his family the best. We hope that the investigation will unfold the way it should," adding that security is evaluated every night on a regular basis, and that, "that night, the response was immediate."

Although Anaheim police say alcohol may have been involved, the motive for the attack remains unknown. Police are hoping more witnesses will come forward.