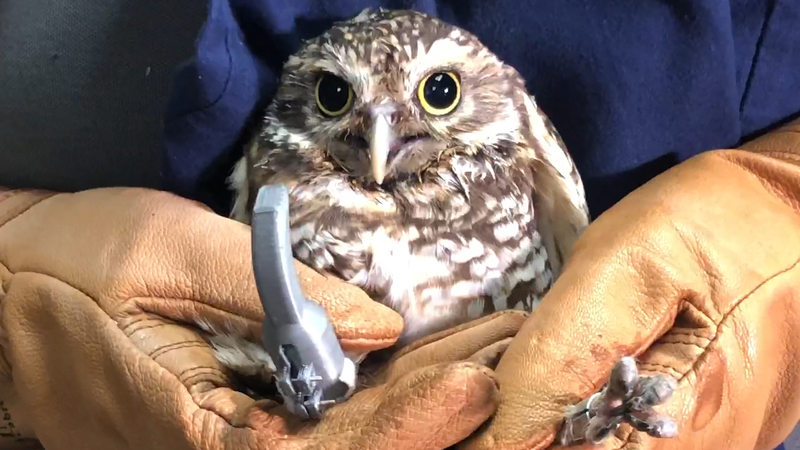 Lindsay Wildlife Experience is a conservation and rehabilitation hospital for wild animals.

Pueo is an 8-year-old burrowing owl who was born and raised in captivity at The Living Dessert Zoo and Gardens in Palm Desert. Her caregivers discovered she had a broken leg. The lower portion of her leg began to die off and Pueo was left with one foot.

CUTENESS OVERLOAD: Today, I witnessed a huge accomplishment for Pueo, a one-legged burrowing owl. @lindsaywildlife has teamed with a group of designers to create a 3-D printed prosthetic leg to improve her quality of life.

"By the time we got Pueo and she moved here for specialized care, she had already been living with her injury for 11 months," said Emma Molinare, curator at Lindsay Wildlife Experience. "That was a good sign within itself that she was able to accommodate for that injury and she was able to be successful with the one foot."

Lindsay Wildlife Experience specializes in special cases and wanted to have Pueo back on two feet. Therefore, the Burrowing Owl Prosthetic Project (BOPP) was formed.

"It is the first time that we think that prosthetic has been done in raptor feet," said Molinare. "We thought of right away that 3D printing was going to be our best option. There is a high amount of customizing that we can do with 3D printing. We also knew that we could make the prosthetic very light."

A group of anonymous designers and engineers heard about Pueo and wanted to help improve her quality of life. With her one leg, Pueo is still able to hop and stand on one foot but, by giving her a prosthetic, she will be able to clean her beak and grab her own food.

"The people who are helping us build this have done a 3D printing project before. They are engineers, they are designers and they are creatives," said Molinare. "Working together with a group of people who have such a diverse background to actually produce the prosthetic and the collaboration with us. We are able to customize that prosthetic that will work perfectly for Pueo."

"What we are trying to do is have her reach her maximum potential. This little girl with her one foot or two. It doesn't matter," said Molinare. "She is spunky, she is feisty, she is a survivor and she is an incredible teacher for this story of all the burrowing animals not only here in California but throughout the United States and North and South America."

Lindsay wildlife specialist and engineers created four different prosthetic models for Pueo. They knew right away that the first model that looked similar to a bird foot would not work. It popped off right away and had the possibility of getting tangled.

"We discussed that a more curved shape will work very well so then Pueo could rest on her heel and rest on the back of the prosthetic and allow her a rocking motion as she moves forward," said Molinare. "We adjusted the part that actually fits around her leg and adding a strap will prevent that prosthetic from rotating. All of what we are doing is tweaking it little bit by little bit to make sure that it is a comfortable fit, that it is light enough and that she is able to wear it for long periods of time."

The fourth prosthetic was a success for Pueo and the prosthetic stayed on longer than it ever did before.

"The prosthetic try-on went so well today. We are so excited," said Molinare. "We are not seeing the prosthetic rotate, which is great and it was a problem with our last iteration. We made a couple of adjustments to the strap and that is all a part of the process and we think now, after this, after the weather dries up, we are able for her to try it on in the enclosure for a long period of time."

To donate or visit the exhibit at the Lindsay Wildlife Experience, visit their website.