At least one home and two outbuildings were destroyed by the Apple Fire, the region's first major wildfire of the season.
KABC
By Marc Cota-Robles 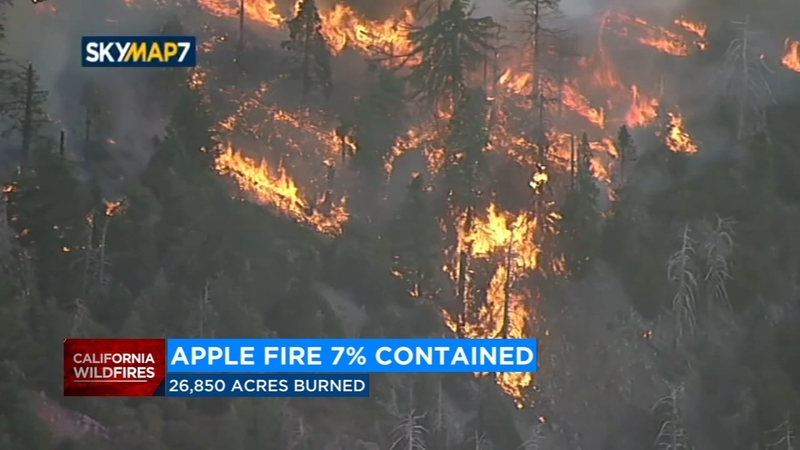 The fire has scorched 26,850 acres and is 7% contained, but many evacuated orders prompted during the height of the blaze remain in place.

Though fire officials said it would not be fully contained for two more weeks, the flames were mostly moving toward the east into the San Bernardino National Forest. Sparse vegetation in some areas was helping to subdue to fire's intensity.

Investigators on Monday determined that the blaze was started by a vehicle's mechanical malfunction.

Investigators with CAL FIRE have determined the fire started Friday around 4:55 p.m. by a diesel-fueled vehicle driving around the 9000 block of Oak Glen Road in Cherry Valley. The vehicle emitted burning carbon from the exhaust system, which lit dry brush in the area, setting off a blaze which took off in hot, low-humidity conditions.

They asked anyone who was driving by that area at that time to come forward to speak with investigators. Calls can be made to the anonymous hotline at (800)633-2836.

The massive Apple Fire in Riverside County was started by a vehicle's mechanical malfunction, investigators have determined.

Officials said at least two outbuildings were also destroyed by the blaze No injuries have been reported in the region's first major wildfire of the season.

At one point, thousands of people were affected by the sweeping evacuation orders. Fire officials said they do not have a time frame for repopulating evacuated areas. An evacuation center was established at Beaumont High School, located at 39139 Cherry Valley Blvd. in Beaumont.

RELATED: Wildfire masks: How to best protect yourself from smoke during a fire

Anyone who goes to the evacuation center is subject to COVID-19 testing before entering, according to fire department spokesperson Fernando Herrera.

The American Red Cross was also assisting evacuees by temporarily housing them in hotels.