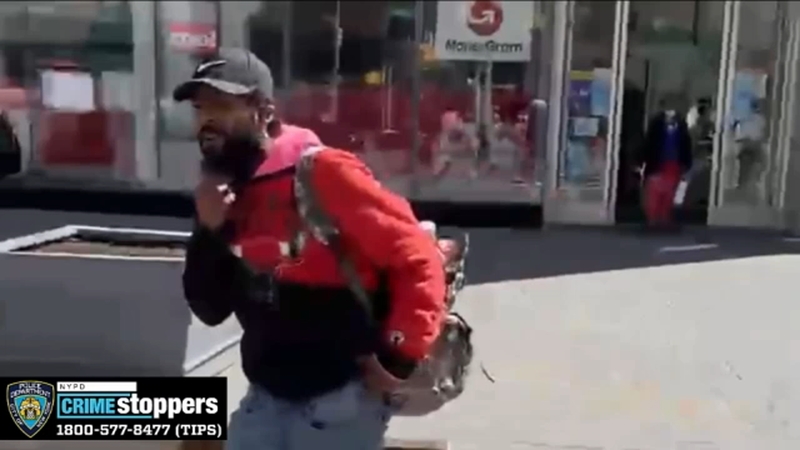 MANHATTAN -- An Asian American mother on her way to a rally against anti-Asian violence in Manhattan is speaking out after she became a victim herself.

The 37-year-old woman, who did not want to be identified, was leaving an Asian American rally in Union Square with her 7-year-old daughter at the time of the attack.

The mother didn't want to give her name but says she is still shaken up.


She sprained her ankle, is on crutches, and still has bruises and lacerations on her face.

She says the man approached her and asked for her sign. She thought he was heading to the rally so she gave it to him and that's when she saw him tearing it up and stuffing it a trash can.
When she asked him to stop, he hit her twice in the face, so she chased him.

"He was destroying the sign and trying to put it in the trash can, so I walked forward and towards him saying, 'What are you doing?' And he just came in front of me and punched me in the face, and then I think I stopped for a little bit, and then I chased him. And there were some people around as well, and I just wanted to get him and call the police," the victim said.

"Just the last few days there were two women attacked, an elderly man attacked simply because of who they are," Mayor Bill de Blasio said. "This is just something that sickens me and it angers me and we will deal with it aggressively."

Several good Samaritans did rush to the woman and child's aid and managed to get cell phone video of the attacker. They said the suspect appeared to be emotionally disturbed.

A huge crowd gathered outside San Francisco's Hall of Justice to call for an end of violence against the Asian community.

Police say it was the 22nd assault on a member of the Asian community this year. Over the weekend, a 66-year-old man was punched in Chinatown and a 54-year-old woman was struck in the face with a metal pipe by a man yelling slurs who was later apprehended.