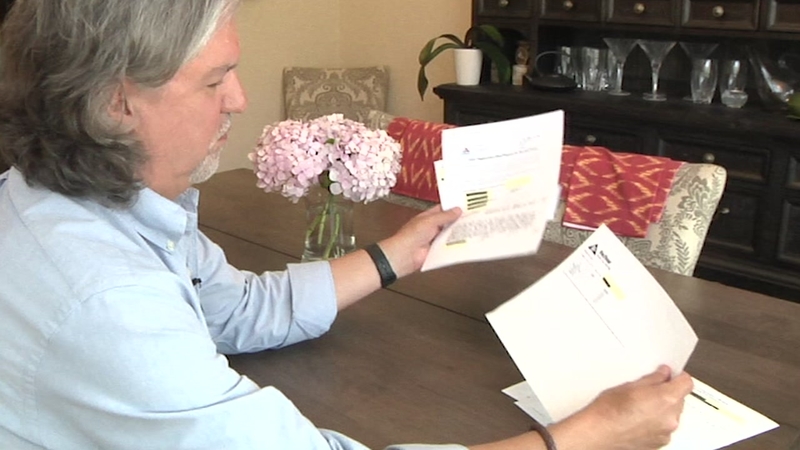 SAN FRANCISCO (KGO) -- Registering your car should be a simple thing. But a Bay Area man ran into a buzzsaw of bureaucracy. It took him more than four months just to register his car. And he needed help from 7 On Your Side's Michael Finney.

Public agencies should work seamlessly together -- but in real life that doesn't always happen. This viewer admits he forgot to pay a bridge toll -- but couldn't believe how it snowballed into a four-month ordeal just to get the tags for his car.

It all began with a simple trip across the Golden Gate Bridge. It grew into a quagmire of bureaucracy that kept Eric Ensign tangled up for months.

"It was frustrating," said Ensign. "An archaic system not set up for success."

How did a bridge crossing turn into such a big problem?

Well since there are no toll takers on the Golden Gate Bridge, FasTrak mailed Ensign a toll invoice. But it went to his old address in Santa Clara, and the post office didn't forward it. So Ensign forgot about it, until he got his DMV renewal notice.

"I was kind of shocked, so I called FasTrak."

He disputed the fine, writing a two-page essay explaining he never got the invoice. But Fastrak closed his case without any response.

Ensigned asked why. "And they said (it was because) I didn't put a FasTrak account number on the form," Ensign said, shaking his head.

Ensign didn't even have a FasTrak account. So, he asked, does everybody need an account in order to appeal a fine?

Fastrak finally did forgive the penalty, but it took two months. Ensign could now register his car -- but then, more delays.

"The DMV told me, 'you have to do it by mail," Ensign explained.

Turns out, the DMV won't let you renew online if you have to clear a penalty, so he had to mail in all the paperwork.

So, he called the DMV and was told to wait six weeks.

But it was already too late. "Technically my registration is expired. So i asked them, 'what if i get pulled over?' And they said well basically that's up to the police officer's discretion whether they give you a ticket. ''

Ensign says he carried all his renewal paperwork in the glove compartment in case he got pulled over. Thankfully, he didn't.

However, on top of everything, the DMV slapped him with a $172 penalty for renewing late, even though he'd mailed in everything on time.

"At that point I was kind of fed up," Ensign said.

He contacted 7 On Your Side. We contacted the DMV. It found his renewal papers, and sent him his tags right away by overnight mail. The DMV also waived that late penalty.

In a statement, the DMV said:

"Most vehicle registration renewals are handled quickly and customers can expect to receive their new stickers within a few weeks. For a variety of reasons, some transactions require special processing by hand, which can extend the wait to receive the stickers beyond the normal time period.
This was the case with Mr. Ensign's renewal, and we apologize for the delay.

About a quarter of all renewals are done by mail, which does have a slower processing time than renewals conducted online or through other methods, such as DMV Now Self-Service Terminals, which prints registration cards and stickers on the spot. So if you want your new registration quickly, using a self-service kiosk, renewing online, or visiting an auto club (AAA) or business partner is the way to go as opposed to by mail. We encourage customers to use those convenient registration options rather than renewing at a field office to shorten the wait for people who have to be there.

It is also worth mentioning that law enforcement generally waits up to two months before pulling over a motorist with an expired sticker because California Vehicle Code Section 4606 authorizes you to operate your vehicle while waiting for your renewal to be processed by the DMV. So best advice to someone who already sent in everything via mail is to just wait for the stickers to arrive. If you mailed your renewal in, the DMV does not suggest canceling your check or submitting payment twice, as this may lead to complications, such as canceled check fees or the need to request a refund.

Late fees are based on the postmark date, not the receipt or processing date. We regret that Mr. Ensign was incorrectly assessed a late fee, which we later waived."

The DMV said it receives up to 50,000 vehicle registration renewals by mail every day, which can cause a backlog.

Ensign was just happy he can drive without looking in the rear view mirror.

"So I hope we're done with it!" Ensign said.


Report a correction or typo
Related topics:
automotivesan franciscodmvconsumer watchfastrak7 on your sideconsumerconsumer concerns
Copyright © 2021 KGO-TV. All Rights Reserved.
7 ON YOUR SIDE