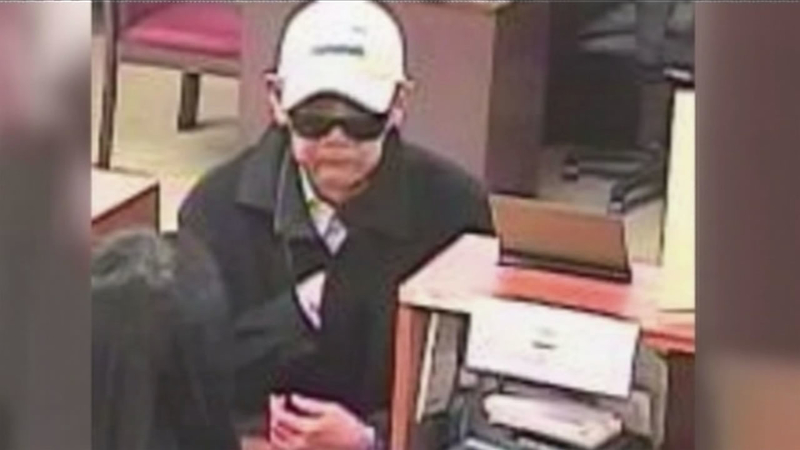 CAMPBELL, Calif. (KGO) -- Robbers are holding up fewer banks in Northern California, according to the FBI, but that doesn't mean the concern is any less.

The FBI is turning to the public to help identify some bank robbery suspects caught on video. In one case, a suspect has gotten away with nearly a dozen robberies over the past eight years.

Some of the photos are grainy, or the faces are covered. The FBI is still hopeful they will be good enough for someone to help identify the bank robbers.

One suspect in his 60s has been eluding law enforcement for eight years. The FBI dubbed him the droopy-face bandit, a reference to his droopy cheeks. He's tied to 10 hold-ups, mostly at banks in San Francisco's Chinatown and Clement Street. The FBI says not to discount his 5'3" to 5'7" height.

"The suspect should be considered armed and dangerous based on him leading victim tellers to believe that he has a weapon," said Bertram Fairries, FBI assistant special agent.

Bank surveillance video shows a robbery that occurred last month at a Wells Fargo branch on South Bascom Avenue in Campbell. The two suspects were armed with semi-automatic handguns.

"They entered the bank and demanded everyone to get on the floor. The suspects wore black hooded sweatshirts and masks covering their nose and mouth," Fairries said.

The masks may make it more difficult to identify them.

The robbers used two getaway vehicles. First, they got into a white Volkswagen Jetta with the help of one or two accomplices. They dumped that vehicle and then got into a green pick-up truck.

The number of bank robberies in Northern California is dropping, 102 this year, compared with 152 last year and 229 in 2013. Similar trends are happening in other major cities.

While citizens may not know these suspects by name, the FBI says tips do help.