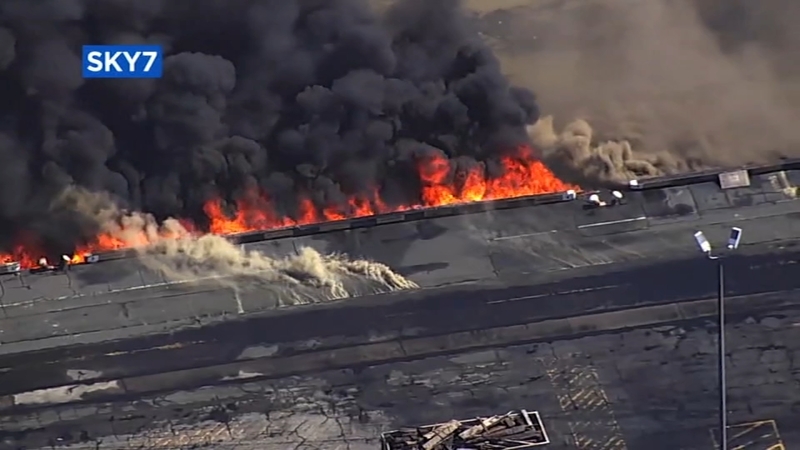 BENICIA, Calif. (KGO) -- Ferocious flames tore through a pier at the Port of Benicia, sending up thick black smoke. The four-alarm blaze began early Saturday afternoon near a silo filled with petroleum coke, a byproduct of refining fuel. It later spread to a long wooden dock, topped with concrete. Putting out the flames was nearly impossible.

"That wood was soaked in creosote which is like an oil product to keep it from rotting, it's also flammable difficult to extinguish even if we had access to it," said Benicia Fire Chief Josh Chadwick.

Fireboats from Oakland, Marin and San Francisco were called to fight the fire from the water. The dramatic firefight would continue through the night. A cause of the fire remains under investigation.

Nonprofit San Francisco Baykeeper shared drone footage over the fire, capturing what appeared to be an oily residue on the water which could pose a risk to the environment and marine life.

"But obviously no amount of petroleum product is an acceptable amount to wind up in the water," said Cole Burchiel from Baykeeper.

The Fire department says its working with the U.S. Coast Guard and California Department of Fish and Wildlife to address pollution issues.

The dock is used primarily to offload imported cars from Asia and also used by the Valero Benicia refinery.

While damage at the port is still being assessed, Benicia's deputy city manager believes economic impacts may be felt across the region, and could make gas prices even worse.

A massive four-alarm fire was still burning at the Port of Benicia Saturday where a dock was fully engulfed.

"If the port is out of commission and there's a challenge to bringing in crude to the refinery, absolutely it will have an impact. Valero supplies a lot of California's gasoline, if they're impacted by processing crude, that will be an impact for the region, said Benicia Deputy city manager Mario Mario Giuliani.

It wasn't the wedding day Lisa and Jeff Brown expected. Their wedding on Saturday was canceled after the venue at the historic historic clock tower was evacuated.

"Getting a call during hair and makeup -- we were all evacuating -- was unreal," said Lisa Brown.

The wedding party pivoted, holding the nuptials at a park downtown and the wedding reception, at a funeral home in Vallejo.

"So a wedding and a funeral on the same day," said Jeff Brown.

Valero Benicia Refinery did not respond to our requests for information Sunday.