Biden rebukes Trump on way to El Paso: 'He has fanned the flames of white supremacy' 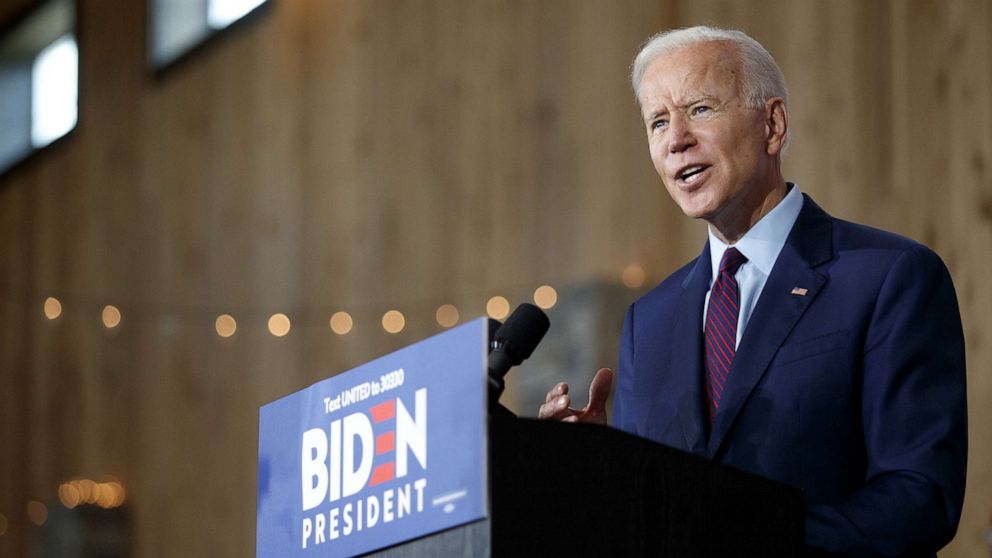 With President Donald Trump still flying from Dayton, Ohio, to El Paso, Texas, in the wake of weekend mass shootings in the two cities, former Vice President Joe Biden said on Wednesday that the president was encouraging white supremacy and violence with his divisive rhetoric.

Biden's comments came in a forceful speech on the campaign trail in Iowa.

"How far is it from Trump saying this is an invasion to the shooter in El Paso declaring, quote, 'this attack is a response to the Hispanic invasion of Texas?' How far apart are those comments," Biden asked rhetorically. "I don't think it's that far at all. It's both clear language and in code. This president has fanned the flames of white supremacy in this nation."

"His low energy, vacant-eyed mouthing of the words written for him condemning white supremacists this week, I don't believe fooled anyone, at home or abroad," he said.

Biden's remarks came the same day that President Trump was visiting the two cities where the shootings happened to meet with first responders, law enforcement, and some of the wounded and the victims' families. The president, while aboard Air Force One, tweeted that he was watching "Sleepy Joe's" speech as it was carried live on cable news networks, calling it "Sooo Boring!"

Asked about Trump's tweet after his speech, Biden said, "He should get a life."

Biden has been critical of the president in the days following the tragedies in El Paso and Dayton but his remarks Wednesday are his strongest comments yet tying the president to white supremacy and violence.

"The words of a president matter. They can move markets. They can send our brave women and men to war. They can bring peace. They can calm a nation in turmoil," he said. "They can encourage us to appeal to our better angels, to our better nature, but they can also unleash the deepest, darkest forces in this nation. And that's what I believe Donald Trump has chosen to do."

"We have a problem with this rising tide of supremacy, white supremacy in America, and we have a president who encourages and emboldens it," he added.

Several of Biden's 2020 competitors have gone farther than the front-runner in placing blame on the president, especially for the attack in El Paso.

Former Rep. Beto O'Rourke, a native of El Paso who represented the city for years in the U.S. House, told reporters at a gaggle earlier Wednesday, "All that fear, that anger, that hatred, that willingness to dehumanize our fellow human beings found a home in the killer and found an expression in that violence that we saw Saturday. He is, in large part, to blame for what has taken place."

"The act of anti-Latino, anti-immigrant hatred we witnessed this past weekend did not start with the hand that pulled the trigger," Booker said. "It was planted in fertile soil, because the contradictions that have shadowed this country since its founding remain a part of our body politic. It was sowed by those who spoke the same words the El Paso murderer did: warning of an "invasion.'"

Ohio Rep. Tim Ryan, who has repeatedly denounced the president's rhetoric in the days since the Dayton shooting, said, "He torches the joint, throws jet fuel on the fires, not the least bit remorseful, is incapable of self-reflection, has zero self-awareness, and that is not a good quality in a leader."

At an event in Washington, D.C., earlier Wednesday, another 2020 Democratic candidate, Montana Gov. Steve Bullock said of the president: "His hateful rhetoric about immigrants, communities of color, Muslims, and other minorities gives a permission structure for hate ... The president of the United States gives aid and comfort to the enemies of democracy abroad, and incites the enemies of decency at home."

Biden has sought to take on Trump since announcing his candidacy back in April, citing the president saying there were 'very fine people' on both sides of the Charlottesville attack in 2017.

"Trump offers no moral leadership; no interest in unifying the nation, no evidence the presidency has awakened his conscience in the least. Instead we have a president with a toxic tongue who has publicly and unapologetically embraced a political strategy of hate, racism, and division," Biden said Wednesday.

A Biden campaign aide tells ABC that the former vice president's message will likely be a theme heard throughout Biden's trip to Iowa, which will span Wednesday to Saturday. Biden currently has nine scheduled events-including a stop at the Iowa State Fair on Thursday afternoon, and an appearance at the Iowa Democratic Party's Wing Ding Dinner Friday night, alongside 19 other candidates. Biden is also expected to attend Everytown For Gun Safety and Moms Demand Action "Urgent Gun Safety Presidential Forum" on Saturday in Des Moines.