Boy who fell off cliff meets firefighters who rescued him 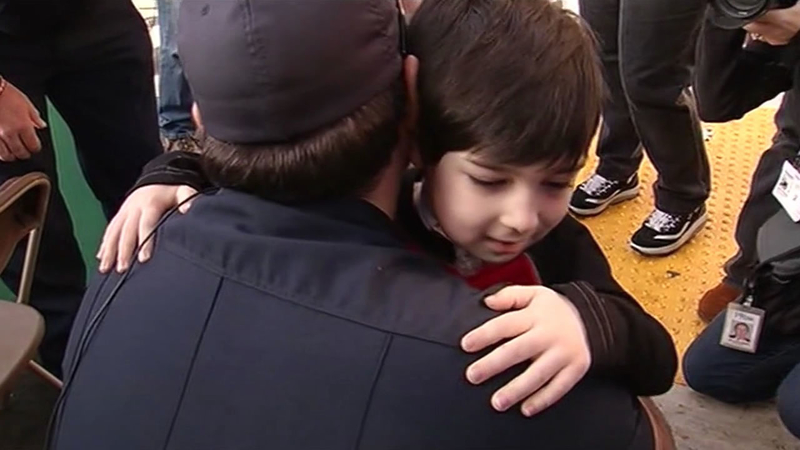 Boy recovering from fall off cliff meets firefighters who rescued him

OAKLAND, Calif. (KGO) -- He calls them his angels and on Wednesday, 4-year old Sebastion Johnson got to meet the firefighters who rescued him from a Bodega Bay cliff last November.

It was a very emotional scene at UCSF Benioff Children's Hospital in Oakland. Sebastion, who had miraculously survived a 230-foot fall from a cliff, reunited with the firefighters who saved him.

Sebastion, who his mother calls her "miracle boy," flashed a shy smile as he arrived to meet the firefighters who saved his life last November.

Sebastion fell 230 feet down a jagged cliff at Bodega Bay and somehow managed to survive - but barely.

"He wasn't really conscious but he was alive. I was just trying to talk to him, trying to keep him calm and just asking about superheroes and talking about 4-year-old stuff," firefighter Marco Barros recalled.

Barros and fellow firefighter Jason Downing were the first to reach Sebastion that afternoon. "His injuries, my God, he was so broken up. Now to see him like this, it's a relief," Downing said.

Both firefighters have 4 -year-old sons. They brought gifts for the young boy, including rescue vehicles and toy fire trucks.

Despite a head injury that put him in a coma and multiple fractures throughout his body, doctors expect Sebastion to make a full recovery.

"We see bad injuries all the time and sometimes we can do a lot with them and help them and you get great outcomes like this and sometimes you don't," UCSF Benioff Children's Hospital's Christopher Newton said.

Sebastion says he wants to be a policeman or a firefighter when he grows up.