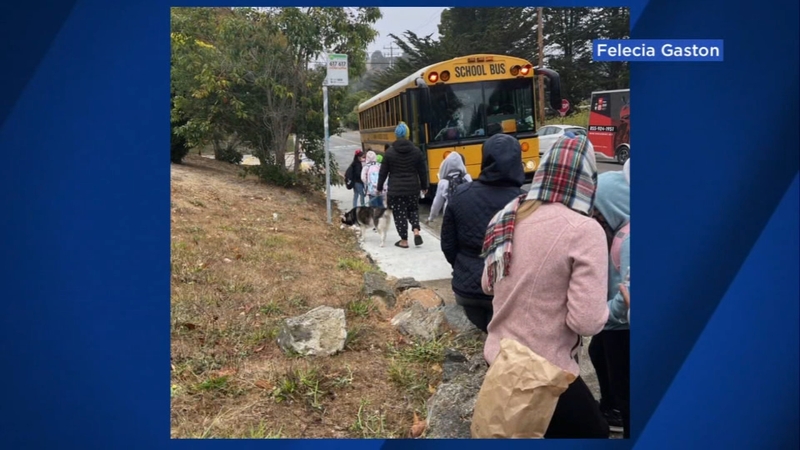 MARIN COUNTY, Calif. (KGO) -- The nationwide school bus and school bus driver shortage is having a big impact on one community in Marin County.

The Sausalito Marin City School District says they have been struggling for months to find a reliable option for their young elementary school students who need to go from Marin City to Sausalito.

Up until Wednesday afternoon when a short-term solution was reached, several families thought they would have no way to get their children to school next week when classes begin after winter break.

"They're saying that we won't have any transportation at all for our kids to get here," Teyonna Allen, whose 7-year-old son Jaydn goes to the Nevada Street campus in Sausalito, told ABC7 News. "I highly rely on transportation for him to get here and back safely."

Jadyn is one of dozens of children in Marin City who recently began attending school in Sausalito. It's part of the district's "unification" plan to better integrate their schools. Superintendent Dr. Itoco Garcia said it created an unintended logistical problem at a time when school buses are in short supply.

Since the school year began, the district has had a contract for bus transportation with Marin Transit, which has mostly served the older students, and Marin Horizon. However, the Marin Horizon bus has often been unreliable. According to Garcia and Allen, it's often late, sometimes broken and a few times hasn't shown up at all.

Over the past few months, Marin City nonprofit Performing Stars has had to step up to help. Executive Director Felecia Gaston said the group has been paying out of pocket to help provide additional transportation and support to students.

A parent using a limo to address the school bus driver shortage is drawing fire from the school board.

"I don't think it's because Marin Horizon didn't try really hard or didn't want it to work out,' Garcia said. "They're facing the same landscape and context as everybody else, and it's really hard to operate a bus program right now."

According to Robert Betts, the director of operations and planning for Marin Transit, the challenges are widespread.

"The biggest one is simply attracting new bus drivers," Betts said. "We have shortages in our training classes. They aren't nearly as full as they've been in the past."

Another challenge has been the new law that requires high school start times to be no earlier than 8:30 a.m.

"Historically, we've been able to reuse buses and serve multiple schools with the same public transit resources," Betts explained, "But now pretty much all the schools start at the same time so as a result we more or less have to cut service and serve fewer numbers of students and schools."

According to Garcia, that's been a primary issue for Marin Horizon, which is late because of traffic and conflicting start times.

It's a very short-term solution for a much greater problem.

"We are happy to accept any and all philanthropy and support," Garcia said. "We have even reached out to Marin Airporter, any transportation company in our geographic location that has drivers, or has buses and is willing to help even for a few weeks."