Ellison recently stepped down as CEO and attendees want to hear what he has to say.

Every year when this conference floats into to town, drivers who take Howard Street through South of Market get a diversion around the massive convention.

This year, crews shut down Howard Street a little early on Thursday and it won't re-open until the conference ends this coming Thursday night.

About 60,000 attendees are expected for this event that has continued to grow over the years.

Ellison will give his keynote address Sunday night. This comes just days after announcing he's stepping down as CEO.

But attendees say, he's still the guy in charge. "He may have stepped down as CEO but he created another position for himself, so he's not really out of the picture," David Sivick said.

The 70-year-old relinquished the CEO title and said those responsibilities will be taken on by company executives Safra Catz and Mark Hurd.

Ellison will stay on as chief technology officer.

He has sometimes been criticized as being flamboyant with his money. Among the items on display on the Oracle Plaza built on Howard Street, is the winning catamaran from last year's America's Cup competition.

You may remember, Ellison pushed hard to have America's Cup hosted in San Francisco. Last year, he was even late to one of his keynote addresses because he was watching one of those races in the city.
Related topics:
businesssan franciscomoscone centerbusinessoraclelarry ellisonsilicon valleychairmantechnology
Copyright © 2020 KGO-TV. All Rights Reserved.
RELATED 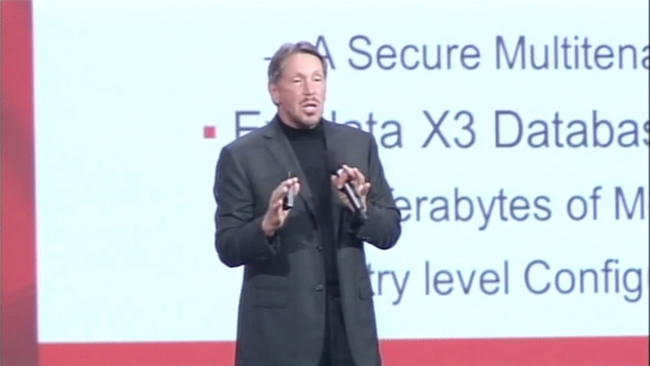