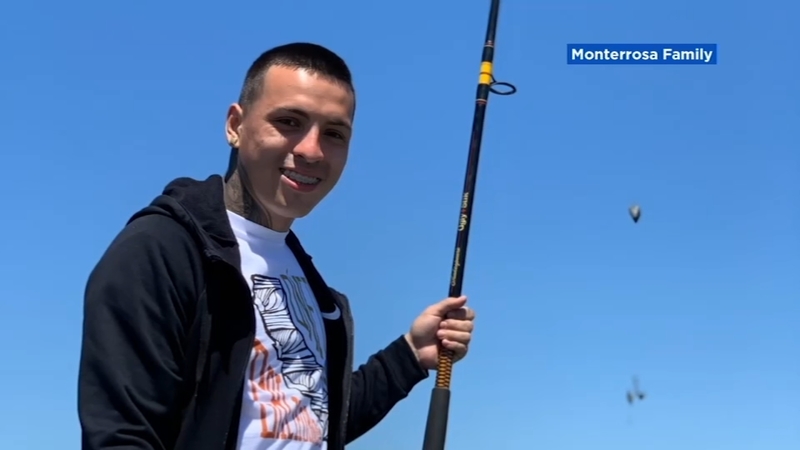 OAKLAND, Calif. (KGO) -- California Attorney General Rob Bonta announced Thursday that the California Department of Justice will conduct an independent review of the police shooting death of Sean Monterrosa to determine whether criminal charges are warranted.

Next month will mark one year since a Vallejo Police Officer shot and killed Sean Monterrosa through the windshield from the back seat of an unmarked vehicle.

Monterrosa was outside a Walgreens where there had been a looting June 2. Vallejo Police said he was crouched down in a half kneeling position, moving his hands towards his waist area revealing what appeared to be the butt of a handgun. It turned out to be a hammer.

In July, Solano County District Attorney Krishna Abrams recused herself from the case.

"The current circumstances compel an outside review to not only restore trust, preserve the safety of our community but also provide confidence in the outcome," said Abrams in July.

Until now, the Attorney General has declined to investigate the shooting.

"What is needed is a fair and complete and impartial thorough and transparent review," said California Attorney General Rob Bonta today.

Bonta announced the California Department of Justice will conduct an independent review to determine whether criminal charges should be filed.

Something Sean Monterrosa's sisters have been advocating for all along. Attorney General Bonta told them over zoom this morning.

"All of us started crying, my parents, my mom's birthday was yesterday so this was almost like a birthday gift to her," Michelle Monterrosa told the I-TEAM.

Bonta said it is unfortunate that up to this point DA Abrams has not acted.

This afternoon Abrams released a statement saying AG Bonta was playing politics and that he had reversed course within an hour of speaking with her this morning and telling her his office would not be reviewing the case due to funding not being available until July 1.

"I just think she's taking space for someone who can actually do their job at the end of the day," said Michelle Monterrosa.

Prior to today's announcement, the Attorney General's Office was investigating the destruction of the windshield by police which was evidence.

Attorney General Bonta promised today, "If there has been wrongdoing, we will bring it to light."

The City of Vallejo also released the following statement:

Today, California Attorney General Rob Bonta announced that his office will conduct an independent review of the officer-involved shooting that resulted in the death of Sean Monterrosa on June 2, 2020. Attorney General Bonta's investigation will determine whether criminal charges are warranted in the Monterrosa case. In the last 11-months, the City of Vallejo has made several attempts to request that an independent investigatory review be conducted into the Sean Monterrosa case. The City is grateful to Attorney General Bonta for his decision today to do just that.

"We welcome and appreciate the announcement that the California Attorney General will review the facts of the case involving the death of Sean Monterrosa. Mr. Monterrosa's family and our community deserve a fair, thorough, and transparent review by an outside agency. We will cooperate with the Attorney General to make sure they have everything they need to conduct an objective and independent review in this case."

"Attorney General Bonta within weeks of being appointed is already playing politics with one of the most critical and divisive issues in our communities today- officer-involved fatalities. It is beyond disappointing that we can't trust the statements of the Attorney General. Today, I spoke to Attorney General Bonta at 10 a.m. regarding our newly implemented Major Crimes Task Force and volunteered to work with his office regarding Assembly Bill 1506. Under AB 1506, the Attorney General is required to investigate incidents of an officer-involved shooting resulting in the death of an unarmed civilian. We then spoke about the review of the officer involved shooting of Sean Monterrosa that occurred on June 2, 2020, in the city of Vallejo, and whether the Attorney General was going to review the case in light of the passage of Assembly Bill 1506. Mr. Bonta stated that his department would not be reviewing the case due to funding not being available until July 1. Within an hour of my telephone conference this morning with Mr. Bonta, he notified me that his department would be reviewing the case, completely reversing himself, and now suddenly blaming Solano County for failing to do its job by not reviewing the matter. This is a material misrepresentation and could not be further from the truth. Since the shooting, there has been an overwhelming public outcry and sentiment by a broad spectrum of members of our community, Mr. Monterrosa's family, and local, state and federal officials demanding the AG's Office review of this officer involved fatality. Despite DOJ's decision to oversee the Vallejo Police Department, DOJ's decision to review an evidentiary portion of the Monterrosa case, and the newly implemented law giving authority to the AG to review these officer involved shootings, the AG's Office has failed to act over the past year and has failed to listen to the will of the People. Having been on the job for less than one month, it is of significant concern that Attorney General Bonta would criticize our office for wanting to ensure that the people of Solano County have complete confidence in the integrity of the investigation. In every case, we seek a full, fair, independent and unbiased investigation for all parties, and that a fair, unbiased, independent and objective decision is made. We listen to our community and work diligently to instill public trust in every decision we make. What creates distrust in our communities is allowing politics to interfere with critical decisions that affect our community."