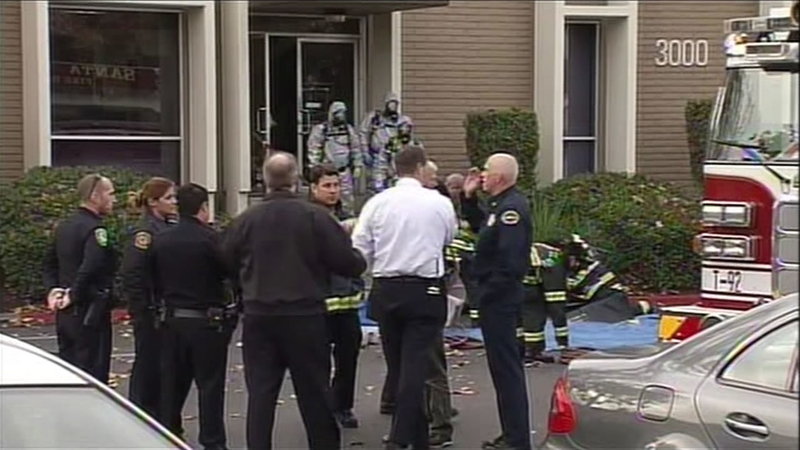 SANTA CLARA, Calif. (KGO) -- The powder in a suspicious envelope sent to the Council on American-Islamic Relations, a Muslim-American civil liberties organization in Santa Clara, is now being tested at an FBI lab.

The CAIR offices increased security Friday, as did the mosque across the street. But ABC7 News was invited to the midday prayer. Those at the mosque were eager to show that their belief is one of peace.

"This is a hard time for Muslims," said a speaker at the mosque. "Yesterday our CAIR office across the street received a package of what looked like anthrax."

Santa Clara resident Asim Sadiq adds, "It's been kind of disturbing. But at the same time there's also good."

A suspicious envelope filled with white powder is top of mind for people praying at the Muslim Community Association in Santa Clara.

Just across the street, an employee at CAIR opened it Thursday afternoon, prompting a swift hazmat response.

"We're so appreciative of the fact that they're taking this very seriously, that they responded so quickly, and that they're thoroughly investigating," said CAIR Bay Area Executive Director Zahra Billoo.

Now the substance and envelope are being tested at a regional FBI lab, as is a similar one sent to a CAIR office in Washington DC.

"Their provocative rhetoric has very real consequences as we have seen in a national epidemic in the increase in the rate of hate crimes towards Muslims," he said.

Disturbed by reports of suspicious mail at @CAIRNational. Rhetoric must change and respect all Americans. It starts w/ political leadership

CAIR continued its work at an undisclosed location Friday and the executive director says there's work the general public can do too.

"Sometimes just saying hello can make a world of difference, especially when people are concerned about their safety," said Billoo.

Sadiq adds, "Yeah, so I think living the religion is probably the best thing, which is like peace and just do good."

Heads and the American flag are high in Santa Clara despite ongoing threats.