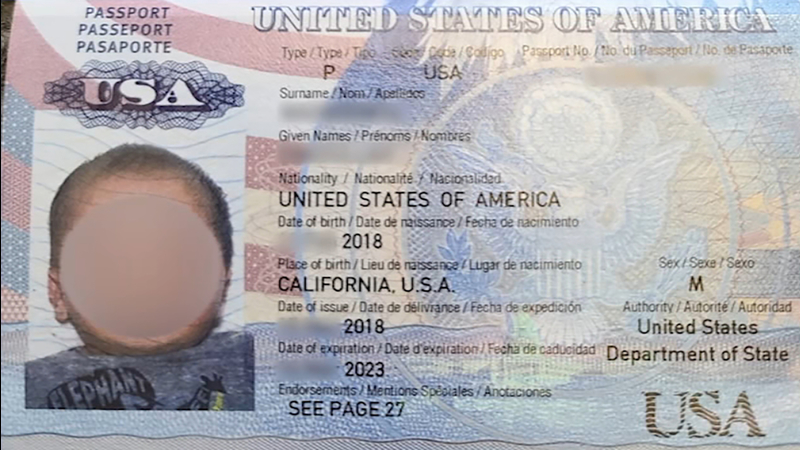 SACRAMENTO, Calif. (KGO) -- The US troop withdrawal from Afghanistan has stranded between 100 and 200 American citizens who want to return to the states. One of them - a young boy born near Sacramento. I-Team reporter Dan Noyes has an exclusive, frightening story about what lies ahead for the child and his family.

This three-year-old boy was born near Sacramento; his passport shows he is a US citizen, and he's going through a harrowing ordeal right now, unable to escape Afghanistan. We're hiding his identity and that of his father, a social worker, and other family members who are all US permanent residents, for fear of them being captured by the Taliban.

James Brown, Veterans Advocate, told the I-Team, "I received a call Sunday morning at about 6 a.m. from a friend of mine who's an active duty Marine Corps officer stationed overseas, and he basically felt like his hands were tied and he needed some help getting this family out."

An East Bay man who recently escaped Afghanistan is mourning the loss of his cousin, who died in the Kabul airport attack.

James Brown is a veterans advocate who's been working since Sunday morning to get the family safe passage through the Kabul airport to the states. He contacted Representative Jackie Speier and her staff, who jumped into action.

Speier wrote a letter To Whom It May Concern, "I believe it is of particular and urgent concern that these individuals be allowed to pass through the gate and be given safe refuge at Hamid Karzai International Airport ... so that they might be available for departure."

The situation in Kabul is growing more dire for Bay Area-based non-profit Roots of Peace, that's been helping Afghan farmers thrive for decades.

Armed with that letter, the boy, his father and several other family members approached the airport, but the Taliban attacked.
Brown said, "And they were stopped by a Taliban checkpoint, and they received physical beatings at the gate and they were pushed back where they had to flee and return to a safe house."

The I-Team spent Monday funneling questions through our ABC News colleagues in Washington to officials at the White House and State Department.

Secretary of State Antony Blinken announced the US Embassy in Kabul will remain closed and the diplomats will be moved to Doha, Qatar, adding, "We will continue our relentless efforts to help Americans, foreign nationals, and Afghans leave Afghanistan if they choose."

So, movement on this on many fronts, including Congresswoman Jackie Speier and her staff. We've scheduled an interview with her for Tuesday and will keep you up to date on the latest information.

Late Monday, the I-Team learned the boy and family are on the move, after linking with other Americans who are desperate to flee Afghanistan -- without the normal channels of the US government, in the chaos that we left behind.