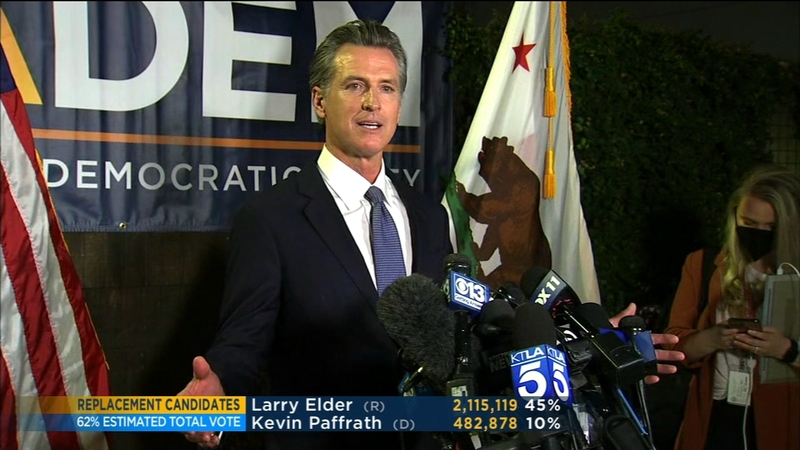 The results of the state's vote were watched around the nation, with the potential for the most populous state turning in a more conservative direction less than a year into President Joe Biden's first term.

With more than 60% of the votes tallied, the "No" side on the recall was leading by roughly a 2-1 margin.

"I'm humbled and grateful to the millions and millions of Californians who exercised their fundamental right to vote and express themselves so overwhelmingly by rejecting the division, by rejecting the cynicism, by rejecting so much of the negativity that defined our politics in this country over so many years," Newsom told supporters in Sacramento after the projections of his victory.

Newsom, a Democrat who led in pre-election polls, is only the fourth governor in U.S. history and the second in California to face a recall. He was elected in a landslide less than three years ago. He needed a simple majority of voters to reject the recall to keep him in office.

In his victory speech, Newsom referred to former President Donald Trump and claims of potential voter fraud not backed by any evidence.

"Democracy is not a football," Newsom said. "You don't throw it around. It's more like an antique vase. You can drop it and smash it into a million different pieces. And that's what we're capable of doing, if we don't stand up to meet the moment and push back."

"I said this many, many times on the campaign trail, you know, we may have defeated Trump but Trumpism is not dead in this country."

Some political analysts suggested Newsom's large margin of victory boosts his political profile throughout the state, and even the nation, when at one point the recall threatened to kill his political career.

"He is clearly much more viable coming out of this than we might have thought three weeks ago when it looked like the race was almost a dead heat," said Raphael Sonenshein, executive director of the Pat Brown Institute for Public Affairs at Cal State Los Angeles.

Voters were asked two questions: Should Newsom be recalled, yes or no, and, if he is ousted, who should replace him? The results of the second question were irrelevant once a majority of voters supported retaining Newsom.

Conservative talk-show host Larry Elder was the leading candidate to replace Newsom if the recall had passed. He had more than 40% of the vote in early results.

Speaking to supporters in Costa Mesa on election night, Elder cited a long list of grievances against Newsom, including low test scores in public schools, a rise in crime, homelessness and high home prices.

"I can't think of anything that this man has done in the last two years that suggests he deserves another day in office," Elder said. "However, we recognize that we lost the battle, but we are certainly going to win the war."

In recent days, Elder suggested the results of the recall election could be skewed by unspecified "shenanigans," echoing Trump's baseless claims of voting fraud in his 2020 race with Biden.

There has been no confirmed evidence of widespread fraud. Elder's campaign website has linked to a "Stop CA Fraud" site where people could sign a petition demanding a special legislative session to investigate the "twisted results," well before any results were announced. It states that "instances of undocumented ballots have been discovered prior to the election date of September 14."

There were several polling place incidents, including one poll worker being removed for wearing pro-Trump clothing while collecting votes.

Some voters also showed up at their polling places only to be told records indicated they had voted already. Those voters were given provisional ballots to cast to ensure they could still vote.

Newsom ended his campaign Monday with a final push from Biden, who warned that the outcome of the contest could shape the country's direction on the pandemic, reproductive rights and the battle to slow climate change.

Jenner entered the race but gained little momentum and left the state for part of the campaign to film a reality show in Australia, finishing with about 1% of the votes among replacement candidates.

Cox, who lost badly to Newsom in 2018, tried to spice up his campaign by hiring a live bear to join him, branding himself as the "beast" to Newsom's "beauty." He only ended up with about 5% of the votes.

Newsom will soon be campaigning again; he's up for reelection next year.

Democratic party leaders rejoiced after the announcement that California voters had rejected the effort to recall Gov. Gavin Newsom.

Orrin Heatlie, the Republican who launched the recall effort last year, cast it as a "David and Goliath" battle and said it was telling that Newsom had called on national Democrats like Biden to "salvage his damaged political career."

The president and other prominent Democrats offered Newsom support in the race's closing days, while national Republican leaders largely kept the contest at arm's length.

The recall needed 1.5 million signatures to make the ballot out of California's 22 million registered voters. It never would have come before voters if a judge hadn't given organizers four extra months to gather signatures due to the pandemic.

That decision came the same day Newsom attended a maskless dinner at the lavish French Laundry restaurant with lobbyists and friends, stirring outcry.

Supporters of the recall expressed frustration over monthslong business closures and restrictions that kept most children out of classrooms. Rising homicides, a homelessness crisis and an unemployment fraud scandal further angered Newsom's critics.

The results of the race are likely to influence the 2022 midterms, when control of Congress again will be in play and the party that controls the White House historically loses seats. They could determine how prominently Democrats campaign on COVID-19 restrictions that many Republicans have decried as unnecessary and overly burdensome.

With much riding on the outcome, Biden was last among a prominent list of Democrats to make cameo appearances in the contest either in person or in ads, including Vice President Kamala Harris, Vermont Sen. Bernie Sanders, former President Barack Obama and Massachusetts Sen. Elizabeth Warren.

A website paid for by Larry Elder's campaign is pushing unsubstantiated claims of election fraud before results have even been released.

While Newsom has sought to nationalize the race, Republicans have criticized him relentlessly for rising taxes, an unchecked homeless crisis, climbing crime rates and housing prices that are out of reach for many in the working class. The recall gained momentum largely out of frustration with Newsom's COVID-19 restrictions that shuttered schools and businesses and cost millions of jobs.


In the only previous recall in California history, voters removed Democratic Gov. Gray Davis in 2003 and replaced him with Republican Arnold Schwarzenegger.