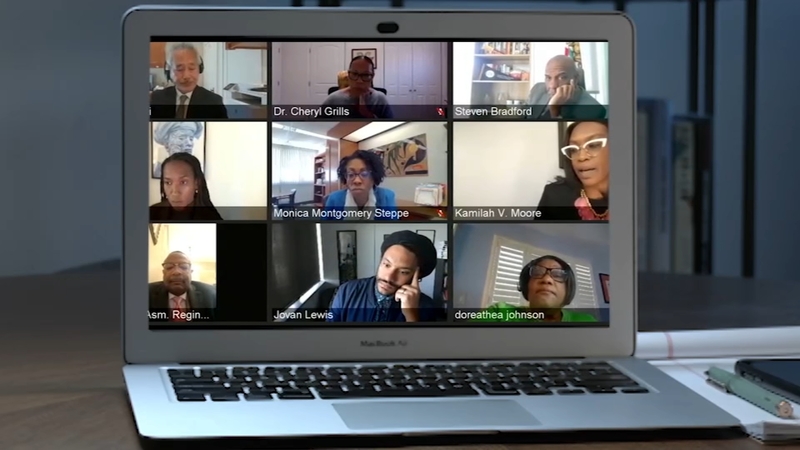 SAN FRANCISCO (KGO) -- California's first-in-the nation reparations task force was poised to answer the question of who should be eligible for reparations in the state Thursday, but instead delayed the historic vote until March.

The nine-member task force created in 2020 by the passage of AB 3121 met for the seventh month.

The group first convened in June 2021, and is tasked with documenting historical harms of slavery and determining what reparations for African Americans should look like in California.

But before answering the question of what, the task force will determine who should be eligible for reparations and what that eligibility could look like.

The task force voted 5-4 on Thursday to delay a vote on the matter and continue discussion until March.

"I am 100% opposed to thinking about this as a final vote on the matter of our community of eligibility," said member Dr. Cheryl Grills.

"I say that I'm against it, because we have not finished doing our work to know the implications and the cost of doing that... denying reparations because they cannot establish that lineage," she said.

The task force disagreed on the timing of the vote and if sufficient expert testimony was heard and weighed.

In January's meeting, California Secretary of State Shirley Webber suggested reparations for African Americans should be limited to people whose ancestors were kidnapped from their homeland, stripped of their ancestry and sold into slavery in America.

Over the last two days, the task force also grappled with if reparations should be extended to a broader group: Black people living in the state who may not draw their lineage to the enslaved in America, but are still inflicted by historic and present systemic racism.

"If you have black skin, you are catching hell in this country," said member Lisa Holder.

"Some of us have just had a harsher experience with this thing of racism, oppression, and enslavement," said vice-chair Dr. Amos Brown.

After debate that extended beyond the initially allotted time, it was clear the task force understood the gravity of the vote at hand and decided to delay a decision.

"It was recognized that they are not finished with their process, that there might be other types of information that would help them to make that decision. Which, again, will have a tremendous impact on this extremely historic issue," said Nkechi Taifa, director of the Reparations Education Project.

Studies show that Black Americans are behind when it comes to building wealth. But the odds aren't insurmountable.

Taifa provided expert testimony to the task force on past efforts to gain reparations on Wednesday.

She acknowledged the work before the California Reparations Task Force is both historic, but is also a continuum of the fight for redress for African Americans that dates back more than a century.

The remainder of the day's meeting centered around the preparation of the first of two major reports by the task force.

Part one of the report will document the historical connection between 400 years of oppression to present day consequences for Black Americans.

Topics include slavery, political exclusion, racist housing practices, environment, the justice system, and a number of other facets of life laced with inequity for Black Americans.

This substantial report, projected to span hundreds of pages, will be released in June.

This summer the task force will hold at least 10 listening sessions across California to hear testimony on the impact of the legacy of slavery both historically and to the present day.

The second part of the report will be released in June of 2023, according to the task force.