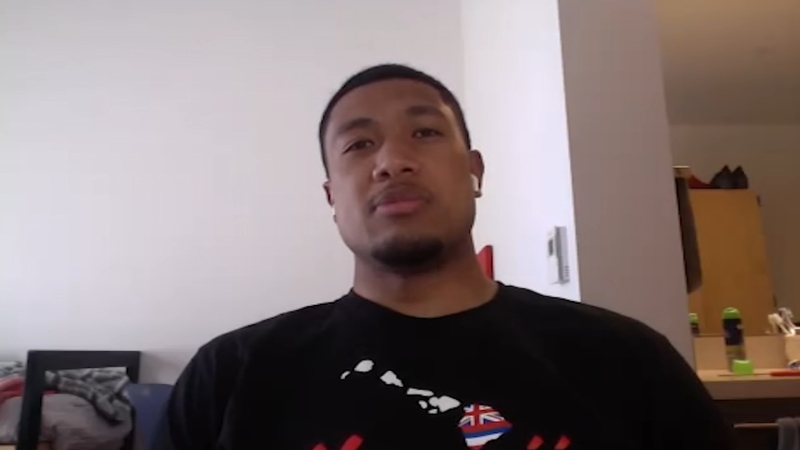 CONCORD, Calif. (KGO) -- A Division 1 football player from Concord is being credited for helping police apprehend a car break-in suspect. That same suspect was then caught on camera months later committing an even more heinous crime targeting Asian seniors.

Dramatic surveillance video shows a police officer yelling "Do not move! Do not move!" at a man in a hooded sweatshirt running away from a home along Campbell Street in Visitacion Valley.

Police documents show the man to be Roman Banks, who broke into the home of two Asian seniors, ages 81 and 87 back in February.

Banks runs from the home and in the process drops his gun, which deploys twice.

But this story really begins just a couple months earlier, when Semisi Saluni of Concord, an Oregon State outside linebacker unknowingly had his own run-in with Banks, while he was saving his family from a car break-in while sightseeing at Twin Peaks.

A recent college graduate had the ultimate adrenaline rush after saving a 75-year-old woman, who was attacked and carjacked at a Safeway in San Francisco's Richmond District.

"The person broke in, broke the window there and then, took my mom's purse and tried to run," says Semisi via a Zoom interview from his dorm room at Oregon.

After his cousin tackled Banks to the ground Semisi's quick moves on the football field translated to holding Banks until police could arrive on scene.

"I'm just grateful everyone is safe and nothing happened to my family."

His father, even offered words of advice to Banks before he was apprehended.

"My dad tried to give him some advice and to make better choices and stuff. We didn't even press charges, hoping the kid had his lesson learned."

Clearly those words didn't stick, as Banks was arrested - according to police documents - and later arrested again for kidnapping, conspiracy and burglary in the burglary case shortly after. As Semisi continues living his dream playing D1 football and hopes to one day make it to the NFL, he has these words of advice for Banks, who is only a few years younger than him.

"My advice for the youth is 'believe you can make it out and you can do better and be an example to others.' No matter where you come from you have to put your mind in the right place make your money go work get a job go to school. The small simple things anybody can do it."

ABC7 News reached out to the DA's office who sent this response:
Our office filed charges against Mr. Banks for the Twin Peaks burglary and he was released on his own recognizance. That case remains pending. In Mr. Banks's more recent case, our office has filed more than 10 felony charges against him and we sought his detention without bail. The court set bail of $100,000 over our objection and Mr. Banks then posted bail. His preliminary hearing is set for April 15.