Three people were injured when a taxi cab jumped a curb along San Francisco's Market Street.

The injured include the 59-year-old taxi driver, as well the 66-year-old man who ran a shoeshine stand and his 40-year-old homeless assistant. The crash happened around 3 p.m., not far from the Montgomery BART station, at Market Street near Sutter Street.

Witnesses say the yellow cab was flying down Market Street when it went over the curb at Sutter Street and crashed into an advertising kiosk and the shoeshine stand where Saleem Bey and his assistant were working. 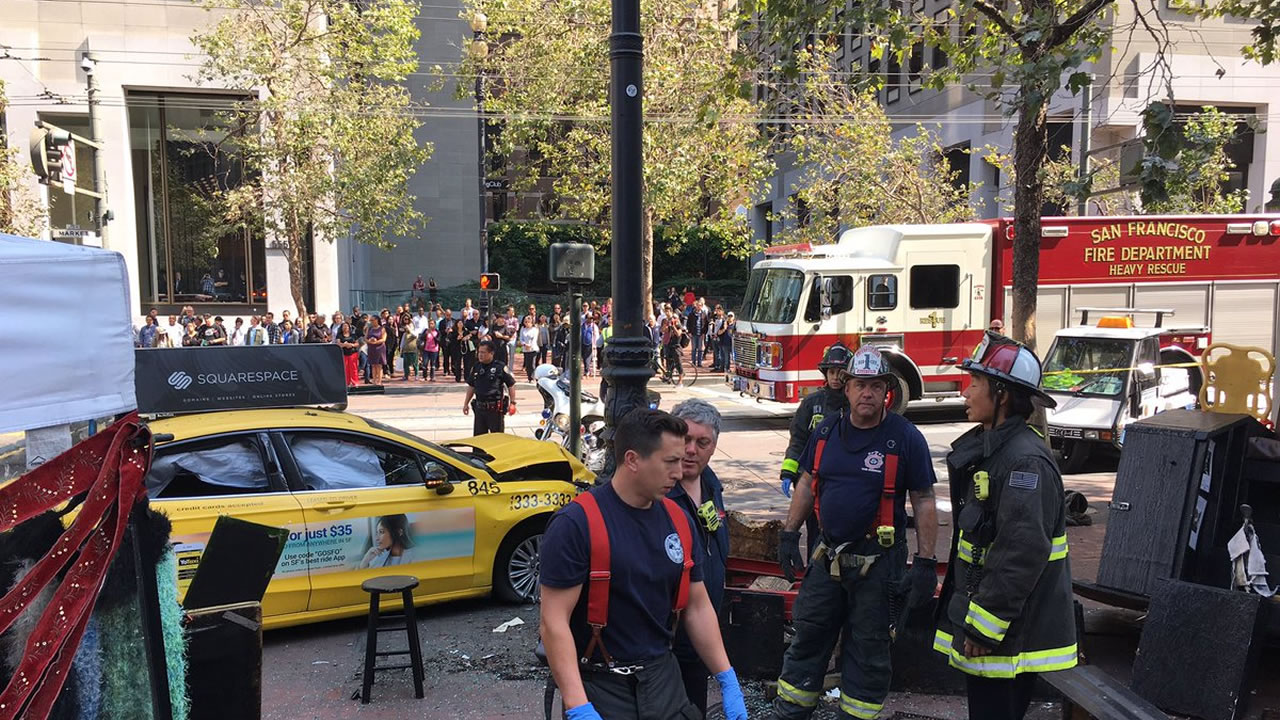 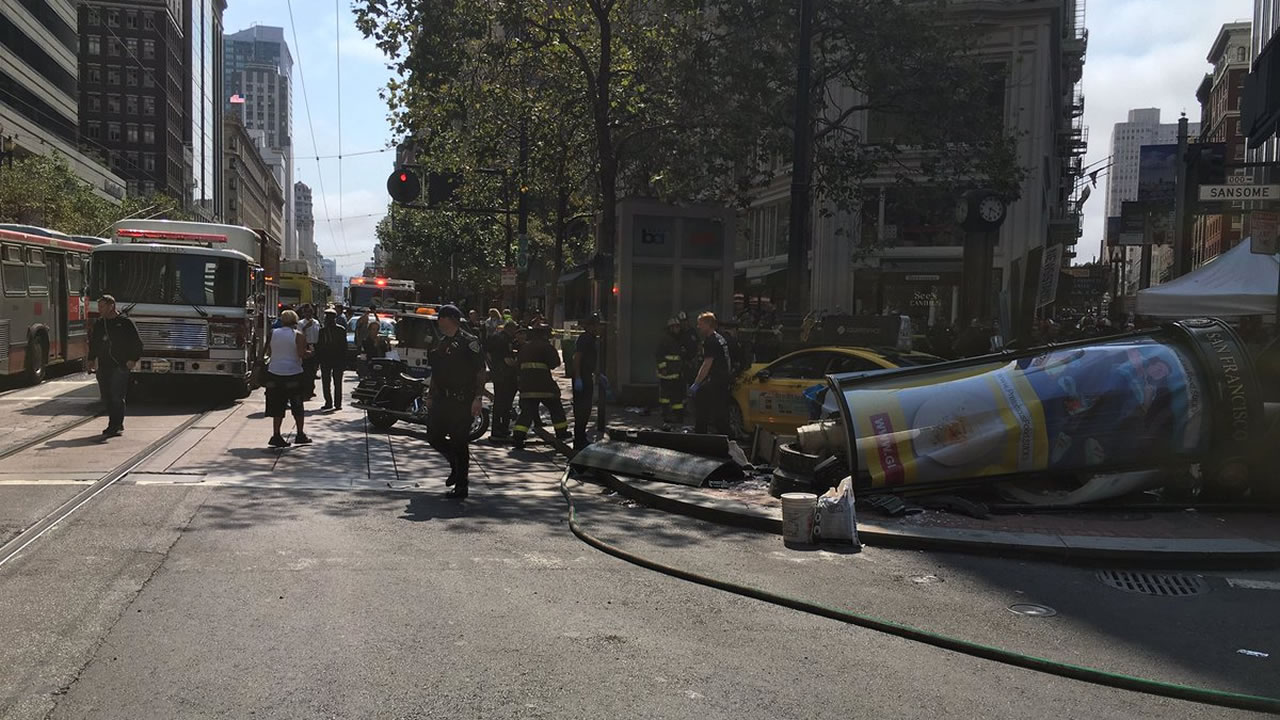 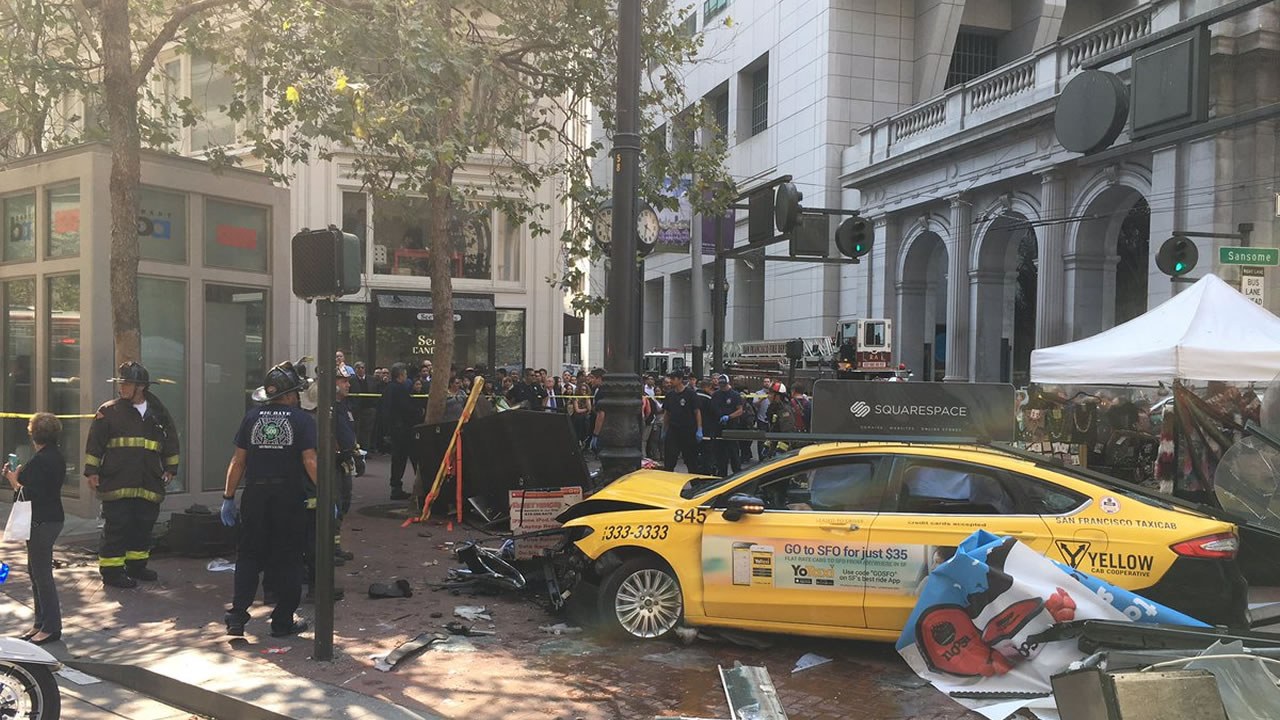 1 of 10
Injuries were reported after a taxi crashed into pedestrians in San Francisco's Financial District on Tuesday, August 23, 2016.
KGO-TV

Witnesses say Bey has shined shoes in San Francisco since 1999. Bae is in fair condition and his assistant is in critical condition. The taxi driver has been released from the hospital.

A woman, who was a good friend, was at her jewelry stand, just four feet away from the crash. "I just heard a crash, but what I did see was the old man flying up in the air, like something out of a movie, like something unbelievable. He laid down on the ground and he wasn't moving," said Susan Marie Giammona, a witness.

The homeless man was buried in debris. The cab driver stumbled out of the taxi and collapsed on the sidewalk.

"There are three people who are facing life-threatening injuries from this collision. Two of them were at the shoeshine stand and one was the driver. They have all been transported to local trauma centers," said San Francisco police Officer Grace Gatapandan.

Giammona said people stopped to help, calling them the angels of San Francisco, as she called 911.

San Francisco police are investigating the cause of the accident, including the possibility that the cab driver suffered a medical emergency behind the wheel. But witnesses say the cab was speeding down Market Street.

"I see them going down here 60 miles an hour, sometimes more, to get to their next destination. And this is what happens. He was going very fast," Giammona said.

Commuters stopped to take pictures of the corner where the cab destroyed the advertising kiosk and the shoeshine stand, where Bey gave a homeless man a job, the man who is now in critical condition.

"Always get your shoes shined, always smiling and making an effort," said Alina Katz, a customer.

Everyone who is used to seeing them in the area is praying for their recovery.

PHOTOS: 3 injured after taxi crashes into pedestrians in SF