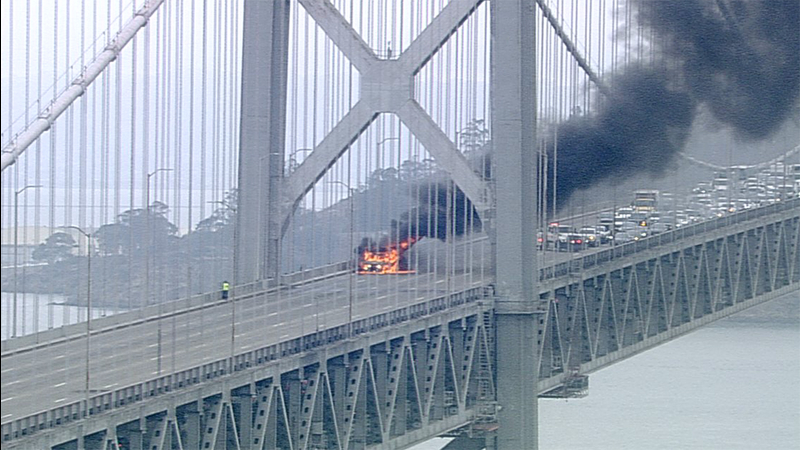 SAN FRANCISCO (KGO) -- Bay Bridge traffic was brought to a standstill this morning after a truck carrying propane tanks caused an explosive fire.

The explosive flames started around 8:25 a.m. and the fire raged out of control for about 30 minutes. The CHP said propane tanks in a utility truck carrying roofing supplies exploded in the fire.

We hit the gridlock after the toll plaza. pic.twitter.com/WJOr8GstdQ

Firefighters from San Francisco responded. Officials shut down all traffic so firefighters could drive the wrong way on the westbound upper deck to get to the fire. While they made their way to the emergency -- propane tanks on the truck exploded. There were at least three different bursts between 8:25 and 8:40 this morning.

Caltrans said it opened all lanes of the bridge at 1 p.m.

During an inspection, Caltrans engineers determined that the bridge was structurally safe, however, the asphalt would need to be replaced due to concerns over the longevity of the pavement.

I’m on the #BayBridge where there are reports of a truck that has caught on fire. Backup is for miles and we’re not moving at all. pic.twitter.com/pfbA69MoFf

Three people were in the vehicle but no injuries have been reported.