EXCLUSIVE: 2 Asian seniors believe they were targeted after car fires in Oakland 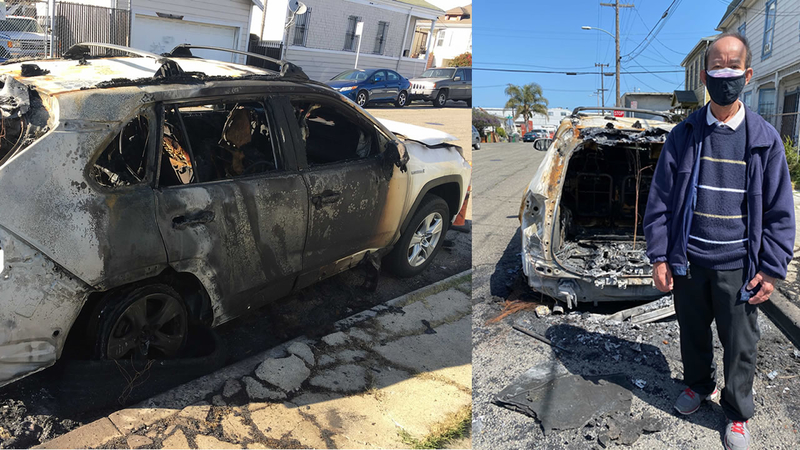 OAKLAND, Calif. (KGO) -- Two Asian seniors in their 60s and 70s were woken up Saturday morning to flames consuming their cars outside their Oakland homes.

Mr. Chheng, who doesn't want to use his last name, owns a white Toyota SUV he purchased two years ago that was charred to a crisp. The other vehicle which was parked directly behind Mr. Chheng's belongs to a neighbor who does not want to be identified out of fears of retaliation.

At a time when so many Asian Americans are feeling under attack, Mr. Chheng who is Cambodian and his neighbor, Chinese, can't help but feel like they were targeted. He says there are only two homes owned by Asians along this road. The rest, Latino.

Abe Santos lives across the street and says this was too close for comfort.

"Yeah, I'm scared because we have kids." And points out her own husband's vehicle was right behind the Chinese man's car which could have caught fire if he hadn't moved it just in time.

Oakland Fire responded to the incident Saturday and says right now they don't have any evidence to confirm foul play.

Just over a week ago, ABC7 News reported on an Asian man with disabilities who had his vehicle set ablaze in Redwood City.

A Redwood City man with disabilities discovered late Saturday morning that someone had set his car on fire. The victim is Asian, and his sister is concerned this could be racially motivated, although police have not confirmed this as a hate crime.

As for Mr. Chheng who is an immigrant the past year has already been so hard.

"I lose everything. My job, and now my car. I need to come back for my life."

He sends this message to anyone who is listening to his story, on behalf of all Asian Americans.

"We want peace right now. We didn't do anything wrong to people. We just want peace and live in the United States."

A local organization is currently setting up a GoFundMe account to help Mr. Chheng with the expenses to replace his vehicle and cover what insurance won't.

A man is being hailed as a hero after he helped rescue an Asian woman from an assault at the Diridon Station in San Jose.