Debris from out-of-control Chinese rocket hurtling toward Earth at 18,000 mph 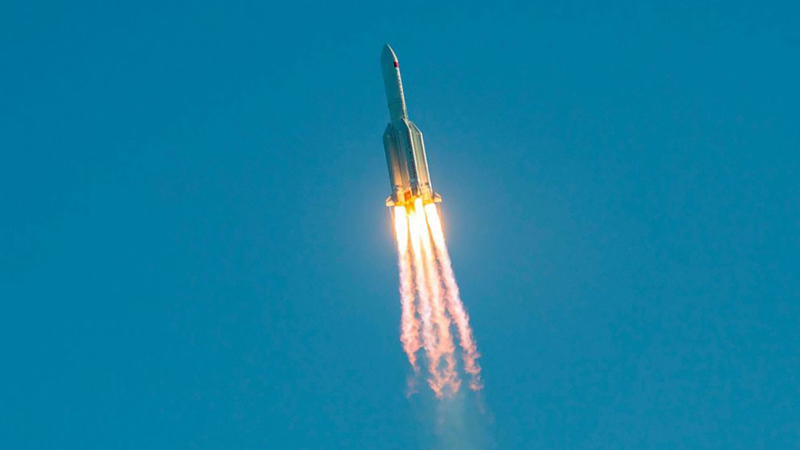 WASHINGTON -- Predictions for when and where Chinese rocket debris hurtling toward Earth is expected to land are narrowing.

The section is part of a rocket called Chinese Long March 5B, which launched a module of the country's first permanent space station into orbit last week.

Officials have been tracking the rocket body's uncontrolled return to Earth for several days now, estimating when it might reenter the atmosphere.

The rocket body's reentry is currently projected at anywhere between 7:30 p.m. ET and 1:30 a.m. ET, according to the latest U.S. Space Force data.

The good news is that debris plunging toward Earth -- while unnerving -- generally poses very little threat to personal safety.

The U.S. Space Force has projected four possible orbits for reentry in play -- three over water, one over land.

Potential landings over land are subject to change, but currently include the Southeastern U.S., Mexico, Central America, the Caribbean, Peru, Ecuador, Colombia, Venezuela, parts of Southern Europe, much of Northern and Central Africa, the Middle East, Southern India and Australia.

CelesTrak just added a fully interactive view of the Long March-5B reentry with corridors that more accurately reflect how this event evolves and where reentry can reasonably be expected to be seen (based on @18SPCS data): https://t.co/Gdwbvsms0Y. pic.twitter.com/fH21mgjnpu

Since the rocket section is moving at 18,000 mph, experts won't be able to estimate a reentry location until a few hours before it happens.

People can follow the latest reentry time estimates at Space Track, which is working with the U.S. Space Force on tracking the debris.

The massive rocket body measures 98 feet long and 16.5 feet wide and weighs 21 metric tons, according to the Aerospace Corporation, a nonprofit that performs technical analyses and assessments for a variety of government, civil and commercial customers.

Instead of falling downrange during the launch, the empty rocket body reached orbital velocity, which placed it "in an elliptical orbit around Earth where it is being dragged toward an uncontrolled reentry," the corporation explained in a blog post.