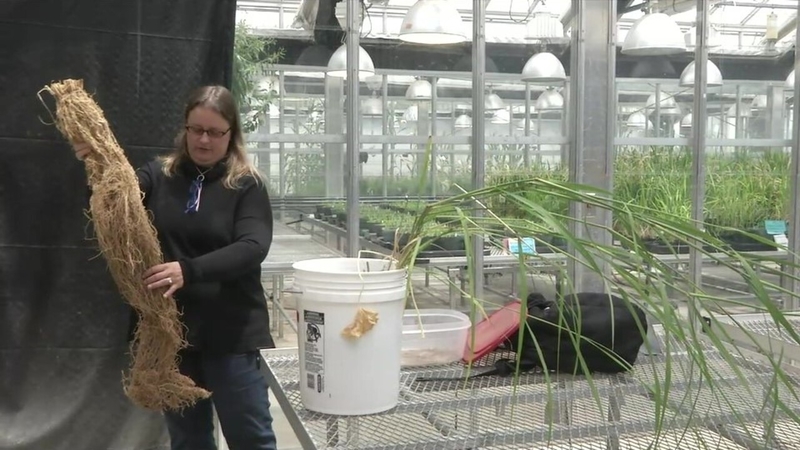 SAN FRANCISCO (KGO) -- As greenhouse gasses continue to pour into our atmosphere, researchers have struggled for solutions to harness dangerous pollutants like CO2. However, in a nursery at the University of California, Dr. Jennifer Pett-Ridge, Ph.D., and her colleagues are gathering evidence for a solution that could be right under our feet.

"What you're looking at here is the roots from the switchgrass and surrounding plants," she explains, showing off the long, dangling, brown roots.

CLIMATE WATCH: How to be ready for wildfires, heat waves, drought and power outages

Pett-Ridge splits time between Berkeley, and the Lawrence Livermore Lab, searching for ways to sequester pollutants like CO2 underground, with the use of specific plants. In this case switchgrass.

"It's root system can apocryphally go down 50 feet. We've measured it to 12 to 15, and I got sick of digging at that point," said Dr. Pett-Ridge.

And deep is good. Especially if you understand that plants, including switchgrass, process the carbon that's in CO2 as part of photosynthesis, essentially pushing it down through their root system, where it interacts with nutrients in the ground. At depths of several feet, researchers say the CO2 is essentially sequestered from the atmosphere.

RELATED: Biden to announce US will aim to cut carbon emissions by as much as 52% by 2030 at climate summit

"So if we're putting carbon that deep in the ground, we're never going to plow that deep. It is a way of literally locking away carbon," says Pett-Ridge

Researchers say metric tons of carbon have already been lost from the soil due to agriculture with shallower crops over the last century. A paper released this summer by an international team showed that native grasslands could be more efficient at storing carbon underground than even healthy forests. And in parts of California, more practical.

Katerina Estera-Molina, M.S., is a project manager and soil microbiologist helping to keep plant species primed for research. She maintains specially designed plant growth chambers to measure how the plants are processing C02.

"And controlling the kinds of carbons that go in," said Estera-Molina.

And earning about where natural carbon catchers like switchgrass can have the most impact could be critical in the future.

While forests do hold onto carbon above ground, they're increasingly vulnerable to wildfires -- and with worsening drought conditions, orchards and tree plantings may no longer be sustainable.

"So there are a lot of landscapes we've calculated that could be amenable to these deep-rooted perennial crops, where we're not just growing something above ground, we're farming as it were carbon," she says.

And perhaps growing a more sustainable future, in the fight against climate change. Researchers also say adding more perennial grassland would be a long-term contribution, since carbon can remain in deep soils for literally centuries.