SAN FRANCISCO (KGO) -- Latino Heritage Month is here and to celebrate we are highlighting Latino organizations, people and culture from the Bay Area all month!

The co-founder of Team Brownsville, Woodson Martin, is based locally. Woodson, along with a group of Bay Area locals, has built a bridge of supplies, volunteers and donations reaching Brownsville, Texas, where founder Sergio Cordova is boots on the ground. What started with a group of four friends serving meals at the border now numbers hundreds of supporters from all over the country and the world. The 501(c)3 non-profit organization has two primary missions: to help asylum seekers who are left at the bus station and to assist the people living at the Gateway International Bridge while they wait for the chance to legally cross the border and seek asylum. They provide a daily breakfast and dinner, and make legal advice and medical care available when lawyers and doctors can join.

To volunteer or donate, find them here on GoFundMe/#Team Brownsville - they were recently named GoFundMe Heroes and will be honored at a celebration in San Francisco this November 14. You can also find more information on their website, TeamBrownsville.org.

Dr. Gregoria Cahill is the Interim Dean, Academic Affairs - Mission and Transitional Studies at City College of San Francisco. Among her many scholastic accomplishments, she is the first in her Afro-Bolivian family to earn a doctoral degree. Her big dreams were born with her in the small town of Tocaña, Bolivia. Earlier this year, she completed her Doctorate Degree of Education in Educational Leadership for Social Justice from Cal State East Bay.. Dr. Cahill's dissertation focused on highlighting the institutional barriers that Latinx students in community college confront when attempting to transfer to 4-year colleges and universities. She follows the legacy left by former Dean Jorge Bell - making education accessible to students in the Bay Area and helping them complete their educational goals. For more information on CCSF's Latinx Student Resource Guide, click here.

Filmmaker Mabel Valdiviezo at Arts 4 Healing, was undocumented for a long time. She underwent her own personal healing from trauma in mind, body and spirit. The topic of wellness is prominent in her latest multidisciplinary project: Metamorphosis: Phase 1. To learn more, visit her website, arts4healing.org

Video translation: A wise woman plays the drum in the four directions. She calls the ancestral spirits of the earth: water, air, fire. There I am, as ancient as her. Nevertheless, fearing my power.

Luz Urrutia is a recognized financial services pioneer and industry leader. Originally from Venezuela, Luz has spent her entire career serving underserved populations across society-from unbanked/underbanked immigrants to the previously banked, to small business owners. Today she is the CEO of the leading nonprofit lender to small businesses, Opportunity Fund, which lends primarily to low- and moderate-income immigrants, women, and minorities.

Comedian Robert Parra may be funny on stage, but life behind the laughs hasn't always been smiles.

In this candid conversation, he talks about his grandparents as role models, growing up as a gay Latino wanting to pursue a creative career, his Catholic mom, family tragedy, and his ultimate path to the stage.

Irma Herrera's solo show, Why Would I Mispronounce My Own Name?, "weaves history and comedic insights into stories about names, shedding light and throwing shade on societal prejudices and assumptions." Irma talks about her journey to becoming a playwright and the importance of embracing one's cultural identity. Learn more about her work here.

"Growing up a Latina in San Jose I never imagined that I could be on TV or in the movies let alone traveling the world bringing joy and laughter to people. I'm proud to represent my culture and my city as a girl who had the audacity to dream. I am proof that anything is possible. My advice to other dreamers: do you, and do you well." ABC7 News applauds Anjelah Johnson for representing the Bay Area and bringing the best medicine to her audiences: laughter. Keep doing YOU, well! To find out where in the world Anjelah will be next with her Technically Not Stalking Tour, go to anjelah.com

Centro Legal de la Raza has been providing legal services for their Fruitvale community for the past 50 years.

Almost Famous
"Meeting people, listening to their experiences, and sharing their stories with others allows me to become the conduit for their ideas. I believe storytelling is the way we can share the human experience, and thus bring people closer together." We sat with photog Roque Hernandez, over a Mexican breakfast on Valencia some time ago. He reflected on his relationship with network reporter, Luis Megid, Univision: "We're like an ol' married couple," he smiled at the thought of his 29-year career with a modern time legend, and they're still going strong. Looking at photos in Luis' Instagram (@luismegid), the bond between the duo is clear; trips around the globe, like to Chernobyl, require a lot of trust and kinship. Roque is like the writer in "Almost Famous," who tours with a popular rock band and sees everything from behind-the-scenes - through his lens, he's eyes for the viewers. In his travels, he's "had the good fortune of interviewing many amazing people, like Michelle Obama, Hillary Clinton, Arnold Schwarzenegger, Al Gore, Dolores Huerta, Shakira, and Carlos Santana, to name a few." All these encounters have helped him hone his craft as a storyteller over the past four decades. In his quiet and mysterious demeanor, he offers that he's "become a seasoned videographer and producer from working side-by-side with the best in the industry at Univision, and by creating independent projects." We salute Roque for taking Latino audiences to places they would've never gone and for boldly covering issues that matter to the community.

Meet Frances Coronel of Slack, a software engineer specializing in user interface (UI) development on the Customer Acquisition Team - her mission is to make your working life simpler, more pleasant and more productive. She is also the Co-Director of Techqueria, a nonprofit that serves the largest community of Latinx in tech in the U.S., where she works with a team to provide Latinx professionals with the resources and support they need to attain, thrive, and remain in a career within the technology industry. As of last month, Techqueria had 4,000+ members in their Slack Workspace, somewhat of a reflection of the work and volunteering Frances manages to balance, among her other passions: open-source, public speaking and mentoring other people of color in tech. You can find Techqueria on virtually any platform, including podcasts, and you can follow Frances @fvcproductions.

Ileana Pulu is the Youth Development Coordinator for the San Francisco Public Library. The library has is hold a month-and-a-half long event called ¡VIVA! Annual Celebration of Latino Hispanic Heritage. Check out what events will be going on to celebrate Hispanic heritage!
EMBED More News Videos

The 2019 San Francisco Latino Film Festival, SFLFF, runs Sept. 20-29. Catch films from across the Americas featuring Latino filmmakers from around the globe. Themes range from rebuilding, adapting, environmental justice, threatened historic landmarks, climate change, hope and more. Get your tickets soon, as most films only screen once: sflatinofilmfestival.org

ABC7 News salutes @sflucho of Cine+Mas SF for presenting the 11th edition of the SFLFF and keeping the arts going in San Francisco for all to see.

"She's a tough woman. She was out here selling empanadas on the street while she was closed. She fought really hard to keep her business alive and open," said Mission artist, Cindy De Losa of Paula Tejeda, owner of Chile Lindo. Paula's Chilean Deli & Coffee Shop will celebrate 25 years this coming January. She's made a lifetime of "connecting and creating community, from San Francisco to Valparaíso." The doorway is a portal into a world of empanadas. The impressive image of the Corraleros (Criollo horse) invites you into their rodeo culture. Today is el Dieciocho (Chile's Independence Day) yet, on one of the busiest days of the year (she was on her way to the Farmer's Market), Paula made time to share with us about her love, we could hear it in her voice - her artisanal empanadas, made with locally sourced ingredients. Visit her website for recipes or to place your order, www.chilelindo.com. To learn more about our ABC7 Celebrating Heritage campaign, click the link in our bio!

8.. Chile Lindo and the #Homies, frame by #CindyDeLoso (2014)
9. Los Corraleros, or Chilean Criollo, the Chilean national horse breed
10. Chile Lindo is on the corner of 16th Street & Capp (right off the 16th Street BART exit)

"We opened our restaurant in 1996, knowing we'd use our mother's recipes in making traditional Peruvian dishes," said Eduardo, co-owner of restaurant El Toro Loco, as his brother, José, brought out plate after plate of deliciousness. They came from the coast of Lima to the Pacifica coast, sometime in the last century, accompanied by the spirit of Incan culture and the majesty of Machu Picchu. Twenty-three years later, they outgrew their little, red place on Francisco Blvd. and into an expanded, corner location about 20 steps away - today, September 17th, is their 4-month anniversary in their new place. Their business continues to thrive more than ever. Join @abc7newsbayarea in celebrating heritage for the culture José, Eduardo and partner Eric share toward Building A Better Bay Area (BABBA) by serving cuisine that delights all who eat at El Toro Loco Coastal Peruvian Cuisine.

The most notable dish of of El Salvador is the pupusa. The name comes from Pipil language, 'pupusawa,' meaning 'swollen,' which is descriptive of the thick, handmade corn tortilla stuffed with a blend of its most popular ingredients: cheese, cooked pork meat, refried beans. We recommend you try them to understand the goodness of which Jose Vega speaks about. He immigrated from the smallest country in Central America sometime in the last century and is the owner of Izalco Catering, specializing in his own brand of gourmet pupusas. He sells them at three local farmers markets.

"I started Izalco Catering eight years ago because my real estate career came to an abrupt end due to the economic crisis. I decided to bring the flavor of Salvadorean food to a wider audience. I make the traditional pupusa using my grandmother's recipe. I also have one with chipotle chicken and cheese, a vegetarian and a vegan option. My teens are my biggest motivation, who saw me lose all my savings, trying to survive, then start from zero. I want them to know it's never too late to begin again and they should never give up on anything. My next goal is to prepackage my pupusas for sale at local stores."

Pan dulce, a sweet treat, perfect for breakfast or anytime and you can even dip it into your coffee (or not). These Mexican pastries come in a variety of shapes, flavors and clever names. What's your favorite? Conchas, cuernos, orejas, roscas, galletas, regañada, trenza, besos y más.
We took an early morning trip to Panadería La Mejor on 24th Street in San Francisco to meet the owner: "Soy Carmencita. Soy del D.F. y llevo 26 años como dueña de La Mejor." We got a tour of the bakery, which is as warm and cozy as the pan dulce they serve. In the back, where the ovens are, the delicious smell came alive with the sound of Latin music as the baker shaped the day's product.

We're celebrating heritage and we salute Carmen Elias for baking culture into the heart of The City since the early 1990s.

The Latino Giving Circle Network (LGCN) is the largest network of Latino philanthropists in the nation! From Baby Boomers to Millennials this group of civically engaged philanthropists are leading and investing with their values - love, trust, and family! 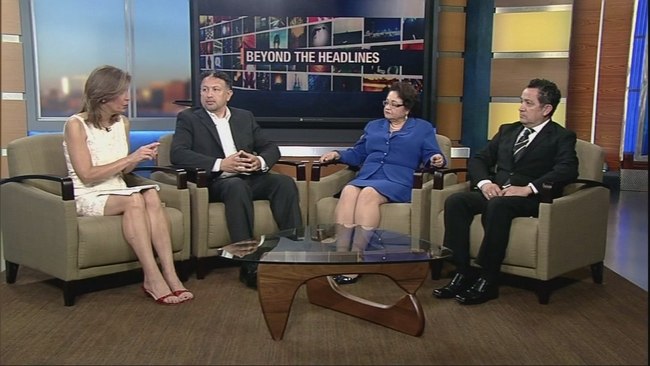