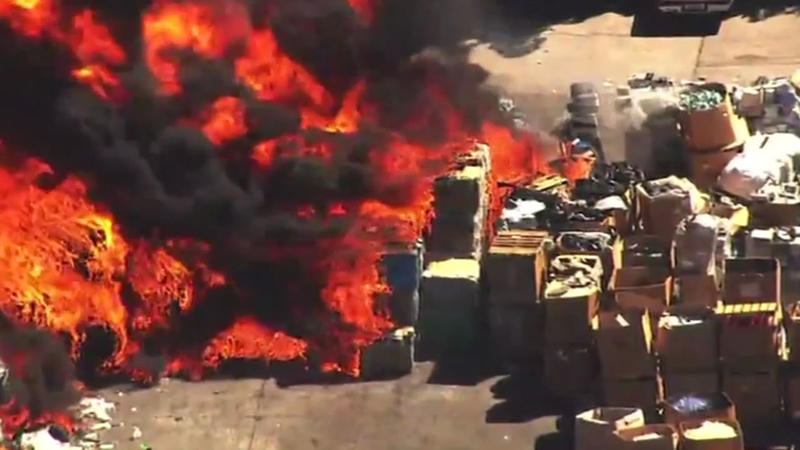 Sky7 HD showed the scene at the AHG Plastics Recycling Center, off Cherry Street in Newark. The smoke could be seen all the way in San Jose and Sunnyvale.

The fire is contained Friday night, but the danger remains. There could still be hot spots smoldering under all that material. Firefighters will monitor over night and authorities will continue to monitor air quality.

"I got home, put the kids in the house, went in the backyard to see the smoke and it was just billowing," said Newark resident Wanda Paulson.


Wanda Paulson lives across the street from AHG Recycling, but you didn't have to be that close to see the smoke. The massive plume was visible for miles.

"It's a recycling business, so it's a mix load of fuels in there, papers and some plastics, and really it's the plastics that make that dark smoke," said Alameda County fire Deputy Chief Jim Call.

"I've already used my inhaler cause when I came through over that a way it was a lot of black smoke and I could smell it and it was making it hard to breath," said Newark resident Sharon Silva.

Alameda County issued a shelter in place order for some 5,000 people in Newark and Fremont who could have been in harm's way.

"I have a five and a seven, grandkids and then I have my mother who is 98 and I wanted to make sure the smoke wasn't coming in the house, but as luck would have it, the way the wind was blowing, it was heading south," said Newark resident Wanda Paulson.

The deputy chief says the fire burned hot and was moving quickly toward surrounding businesses, but damage was contained to the recycling plant and no one was hurt.

Newark: Firefighters are at the scene of a 2-alarm fire on the 6500 block of Smith Ave. @FremontFire, @HaywardFireNews also responding.