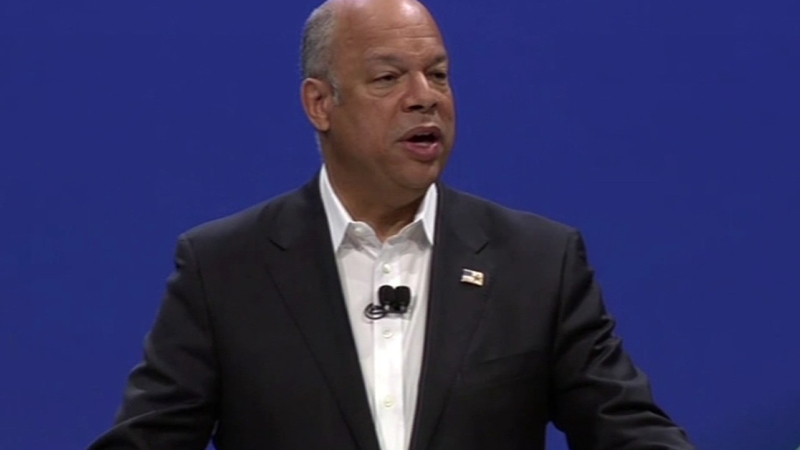 SAN FRANCISCO (KGO) -- Secret service agents were keeping a close eye on their boss, U.S. Department of Homeland Security Secretary Jeh Johnson who was speaking at the cyber-security RSA Conference in San Francisco on Tuesday.

"Cybersecurity is a major priority for my boss President Barack Obama," Johnson said.

Johnson came to headline the RSA Conference on a topic that's more important than ever.

In fact, Toms says Johnson asked to speak at the conference. "Today I'm pleased to announce that the Department of Homeland Security is also finalizing plans to open up the satellite office in Silicon Valley," Johnson said.

The government, he says wants to make nice with Silicon Valley, despite the ongoing tug-of-war over privacy. "The government does not have all the answers, nor do we have all the talent by any means. Cyber security must be a partnership," Johnson said.

Companies that attended the conference are already working with U.S. Department of Homeland Security. "To share the suspicious activity, but not the day to day stuff," Fortinet Global Security strategist Derek Manky said.

Machines are getting smarter at finding threats by analyzing behavior and that could mean there's no need for the government to collect everything. "I don't believe in the back door piece right, we don't have to go down that road," Manky said.

But when they're not busy fighting cybercrime, conference organizers hope some of the professionals there will give their time to new efforts, like teaching kids about cybersecurity.

The Tech Museum wants to send professionals into classrooms and they're also working on new exhibits.

There were interactive games at the conference that teach how security works. "We really want to encourage our visitors to the museum to actually explore careers in security," said Lath Carlson, V.P. of Exhibits at The Tech Museum of Innovation.

That's because cybercrime is growing and so is the need for people to fight it. "It's a small talent pool, it's hard to find. You know we, it's estimated to only be about 5,000 security researchers in the world," Manky said.