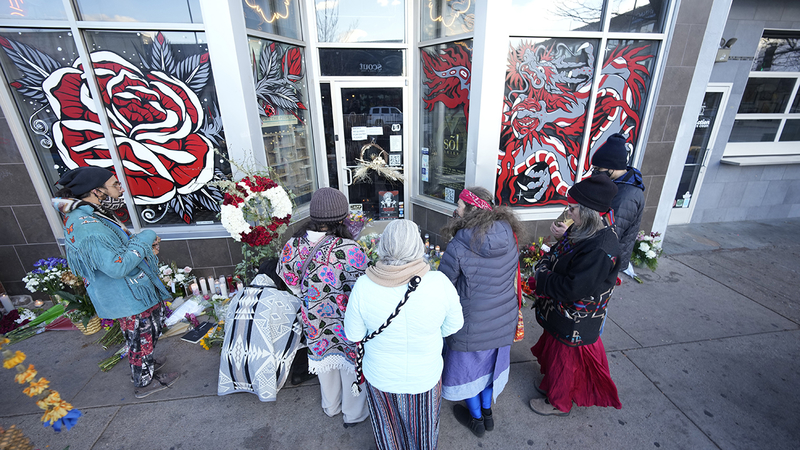 DENVER -- The suspect in Monday's metro Denver shooting spree foreshadowed the rampage in a series of books he wrote under a pseudonym, and he used the names of actual victims in his writings.

Five people were killed in the shootings and several were wounded, including a policewoman. Investigators believe the gunman targeted some of his victims, but his motive remains unclear, Denver Police Chief Paul Pazen said.

The gunman -- identified as Lyndon James McLeod, 47 -- was killed after a gunfight with the policewoman.

McLeod wrote under the pseudonym Roman McClay, according to a CNN review of his writings.

McLeod writes in chilling detail in one of his books about a character named "Lyndon Macleod" who dresses in police gear and kills another character by the name of "Michael Swinyard" at a building located at 1300 Williams St.

A string of shootings across the Denver metro area left multiple people dead and a police officer injured, authorities said.

One of the victims in Monday's shooting was named Michael Swinyard, according to the medical examiner's office for the city and county. Police say he was killed at that same address.

The rampage is among more than 675 shootings that left four or more people dead or injured in the United States this year, according to Gun Violence Archive.

Alfredo Cardenas, the father of Alicia Cardenas, told KMGH his daughter was gregarious, friendly and a "real leader in the community."

Two other Sol Tribe employees were shot in the Monday night rampage, the father told the affiliate.

A Sol Tribe assistant manager, Alyssa Gunn Maldonado, was killed, and her husband, James Maldonado, has been hospitalized after being injured in the shootings, a friend and a former colleague told CNN. James Maldonado was a piercer at the tattoo studio.

Police also identified two other victims in the suburb of Lakewood: Danny Scofield, 38, who was fatally shot at Lucky 13 Tattoo, and Sarah Steck, 28, who was killed while working at the Hyatt House hotel.

Motive behind the shooting still unclear

"This individual was on the radar of law enforcement," he said without elaborating.

It appears McLeod had some connection to the local tattoo community, via his previous affiliation with a now-shuttered studio, though it's unclear whether the shootings are related to McLeod's previous business relationships.

A Denver tattoo parlor listing McLeod as its "registered agent," according to the Colorado Secretary of State's Office, was incorporated in 2005 and became "delinquent for failure to file Periodic Report" in 2017. CNN has reached out to the Denver Police Department for comment.

The site of the former business -- just south of the Denver Health Medical Center, where one of Monday night's shootings took place -- is now occupied by a tattoo parlor with a different name. Another incident was reported at that intersection, Pazen said.

"We believe a gun was fired. However, we do not have any injuries at that particular location," the chief said.

The shootings began just after 5 p.m. when the gunman killed two women and wounded a man in Denver's busy South Broadway neighborhood, the chief said. Sol Tribe is located on Broadway.

The wounded man was taken to a hospital and was in critical condition Tuesday but is expected to survive, said Clark, the Denver police commander.

Authorities then received a call about a burglary where, Clark said, the suspect broke into a building and fired shots. People there escaped uninjured. Several blocks away, the gunman killed the man in his home near Cheesman Park, Clark said.

Denver police identified a black Ford linked to the incident and gave chase, leading to a gunfight, the chief said.

"We believe the individual, after disabling the police car, fled into Lakewood," he said.

The gunman made his way to the Hyatt House hotel in a shopping center a few miles away, where he allegedly shot Steck, who died later, police said Tuesday.

Lakewood police agent Ashley Ferris eventually confronted McLeod in a shopping area near the hotel and "ordered him to drop his weapon as he approached her," a police news release said.

The gunman ignored Ferris' commands and shot her, striking her in the abdomen, the release said.

"Agent Ferris, shot and wounded on the ground, was able to return fire on the suspect. The suspect was shot by Agent Ferris and died on scene," police said.

Ferris remains in the hospital, according to the Wednesday news release.