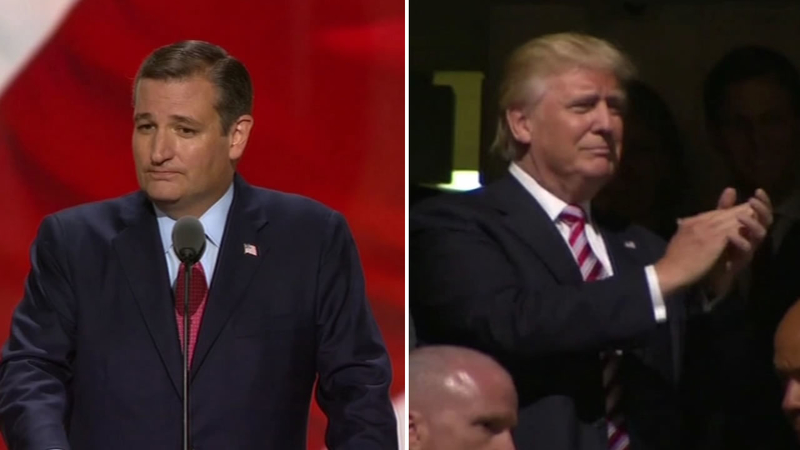 CLEVELAND (KGO) -- Ted Cruz and all the GOP candidates for president pledged to support the Republican nominee for president during the primaries.

But Wednesday night, Cruz refused and instead said, "vote your conscience."

This was supposed to be Mike Pence's night at the Republican National Convention in Cleveland, but the GOP nominee for vice president was overshadowed by a stunning moment earlier in the night. The appearance of Cruz. All 17 Republicans candidates took a pledge to support the eventual nominee, but did Cruz live up to that promise?

In hindsight, it might've been better for Ted Cruz to go the Marco Rubio route and appear at the RNC in Cleveland by video.

Instead, Cruz stood before a party that's now nominated Trump and steadfastly refused to endorse their candidate, even in the face of a loud chorus of chants and boos.

"We will defend freedom and defend and be faithful to the constitution," Cruz said.

In the end, Cruz was booed off the stage just as Trump walked into the arena. At the same time, Cruz's wife Heidi had to be escorted from the building due to verbal threats.

"Honestly, if he wants the Trump supporters for a future run, that wasn't the right way to get them," said California delegate Brian Wallace.

"He signed a pledge and his word isn't worth much and I think his career is over," said California delegate Sharon Carter.

For his part, vice-presidential nominee Mike Pence did exactly what he was expected to do, attack Hillary Clinton and make a passionate case for Trump.

"I am deeply humbled by your confidence." Pence said. "And when we elect Donald Trump the 45th president of the United States, together we will make America great again."

Donald Trump joined Pence on the stage, for his third appearance at the RNC. Trump is expected to give his acceptance speech Thursday night.