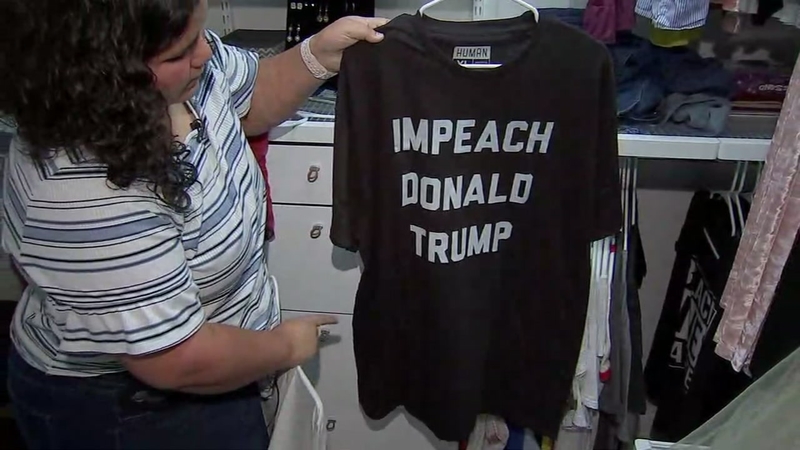 CYPRESS, Texas -- Ximena Duarte doesn't like the president, and she's not shy about it.

A walk into her closet shows about a dozen anti-Donald Trump T-shirts and tank tops. Some say "Impeach Trump," while others say, "Donald Trump is Human Garbage." She even tie-dyed a shirt for variety.

But on August 9, when Duarte went to her upscale VillaSport Athletic Club and Spa in Cypress, Texas, she ran into problems. That day, the gym's general manager, Herb Lipsman, asked Duarte to remove the shirt.

"He basically said, 'Some gym members were offended by your shirt,'" Duarte recalled. "'What are you considering offensive, because I can then point to anyone else at the gym,' and then I said, 'Well, that red shirt offends me. Are you also going to ask them to take it off?'"

Duarte said she had worn the same shirt to VillaSport a handful of times before, but the August 9 incident was the first time she was asked to change clothes or leave. Duarte said she felt singled out.

"If it had said something else, I don't think he would have asked me to take it off. The gym is mostly rich and white, very few people of color at the gym," she said.

RELATED: 'I am a feminist too' t-shirt for boys sparks controversy

Upset, Duarte and the gym's management went back and forth via email, eventually getting the company's corporate lawyer involved. However, much like our national politics, the gym and Duarte could not find common ground.
Thursday afternoon, VillaSport's parent company released a statement:

"Villa Sport promotes and enjoys a diverse membership and staff, and our goal is to create a family-friendly environment for everyone. Ms. Duarte's T-shirt was intentionally provocative and negative. Any statement that any person or group is 'human garbage' is inappropriate in the harmonious club atmosphere we strive to foster."

The corporate office said it fully supports the actions of its Cypress location's general manager.

"If they can wear their MAGA hats to Walmart and the gym, why can't I wear my political beliefs on my shirt?" she asked.