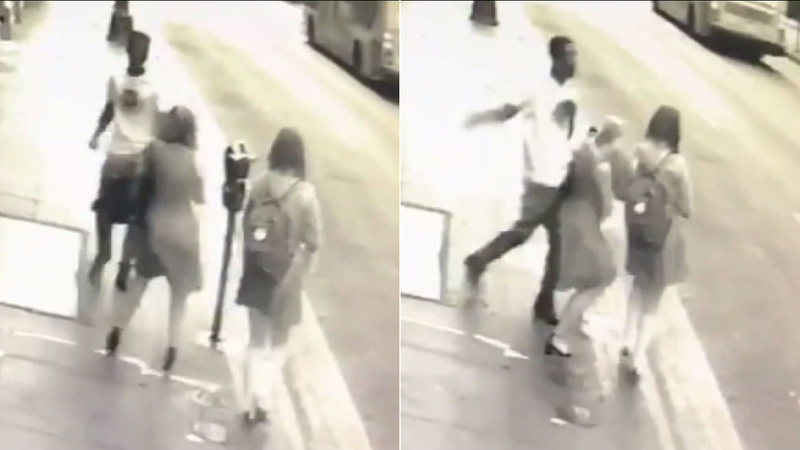 The video shows Tracy Taylor and her 15-year-old daughter walking as a man approaches the pair and swings at them violently.

"He threw two blows, like powerful punches," Taylor said. "It happened so fast."

They avoided getting hit, but are pushed into the street.

The man keeps walking and the two go for help.

Taylor, an attorney, said she saw the same man a week later. She filed a police report, but was told in September it was in the hands of the district attorney's office.

The incident happened a block away from an unrelated attack earlier this week, where graphic video showed a man pushing a pedestrian under the wheels of a truck.

The victim in that attack was left in critical condition with a collapsed lung and broken bones after being pushed into the street and run over by a truck in the apparently random attack.

The suspect is in custody after firefighters saw the video run on ABC7 and recognized the suspect - seen in the video wearing a lime-green hoodie - less than an hour later.

"I'm very anxious," Taylor said. "I am looking to move to a different area."

Eyewitness News reached out to the Los Angeles Police Department to receive more information on the suspect, but have not heard back.

"My finger on the trigger every time I walk in downtown Los Angeles," Taylor said.

"We've let homelessness get past the tipping point in Los Angeles," Bales said.